Long Live the Queen is a visual novel that was developed and published by Hanako Games. It was released for Windows, Mac, and Linux in 2012. This review covers the Windows version, which is currently selling on Steam for $9.99. 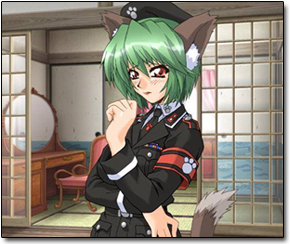 Then I played it and learned just how wrong I was.

So, here’s what’s going on; Elodie is the princess of the kingdom of Nova. Her mother, the queen recently died and now she must survive the 40 weeks in between her mother’s death and her coronation. In those 40 weeks every who-do on the continent with noble blood and a Napoleon complex will try to royally screw you. Elodie has to take classes to level up her skills in order to avoid death, which lurks behind every corner like a university loans officer. All this is going on while she has to deal with all the things that any monarch has to worry about like taxes and bickering nobles. 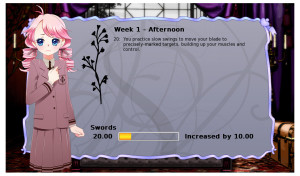 Gameplay consists of watching a series of progress bars slowly rise intermittently interrupted by some Mass Effect style decision making and visual novel stuff. No, I’m serious and yes, this (mostly) positive review is not a work of satire. The gameplay is all about taking classes in order to increase Elodie’s skills. You also have to keep her in a particular mood if you want to learn certain skills faster. You do this by making her do stuff on the weekends to make her more angry, cheerful, depressed, pressured or whatever. Yeah it doesn’t make much sense, but whatever. Elodie then uses her skills to pass certain skill tests that occur throughout the game. Want to win a battle? You need the strategy and logistics skills. Want to deliver a speech? You’re gonna need the public speaking skill. That system is pretty straight forward. The only problem is that some of the skills are clearly more useful to a ruler than others, like dancing and swimming compared to strategy and public speaking. I don’t even think I used swimming at all, which is ironic considering I ended up becoming the Horatio Nelson of Nova with all of my points in naval strategy. I just went primarily with the military, economics, intrigue, and magic and managed to finish the game! It did take some time, of course and the game did manage to make me give a damn about what was going on, so I consider that a victory on the game’s part.

Now, as for the game’s story, it was basically a choose your own adventure book. Actually come to think of it, the game reminds me a lot of those choose your own adventure Goosebumps books RL Stine made back in the ‘90s, the ones where nineteen out of every twenty possible conclusions ended with you getting brutally murdered. I’m reminded of Goosebumps because throughout my playthrough I’ve been shot, stabbed, bludgeoned, poisoned, and (at least I think) hadoukened. 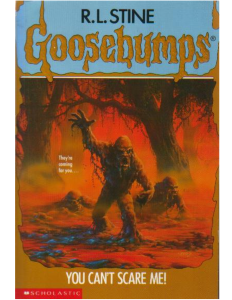 “Yeah, they screwed me up a tad bit as a kid, but whatever, they were a lot of fun”

Because of this the story just sort of feels like the means to get us to the end. The characters just sort of pop in and pop out without really getting much depth and when you remove yourself from the picture it all just seems like a lot of people doing stuff, with almost none of them being really sympathetic except Elodie and maybe that blue haired lady… jesus… um… Julia or something?

That brings me to the next bit: who the was in charge of naming the shit in this game? I mean the name of every province and every damn character seems to be the result of someone having an epileptic seizure on a keyboard. Nobody out there is going to remember ‘Talarist, Duke of Sedna in Talasse’. I ended up just giving everyone nicknames in my head like, ‘that girl that tried to kill me’, ‘that long-haired person that shows up near the end’ or ‘that creepy pervert that wants to do some messed up Lolita with me’. Seriously if you expect me to remember half these people you better make it so that I can remember their names.

I do wonder if this game would have been better with roguelike mechanics. You see after a few playthroughs I basically understood everything that was going on and was able to make my decisions based on knowledge of future events and this is coming from someone who didn’t bother with the divination skill! <Ort, please insert a centered picture of the divination teacher from Harry Potter with the caption “didn’t exactly have the best advocates for the subject growing up”> I think that if they had added roguelike mechanics to this game the developers could have negated the efforts of people who suck the fun out of everything, like me. I’m not sure how it would work though, but It’s still an idea worth toying with. 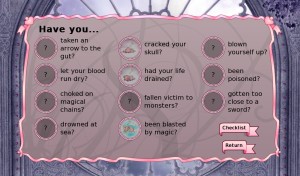 If there was one thing that got on my nerves to the point where it justified being both petty and pedantic it would have to be the damn sound design. The game is devoid of any voice acting (not that that is an objectively bad thing) and the only sound effects occur during only one point in the game. This left me with the only sound being the game’s music, which I’m pretty confident was just looped audio of some kid practicing the piano. I eventually just turned the music off because it was the worst thing I heard in a video game since the Arkham games, where I was forced to listen to Harley Quinn’s annoying high pitched Brooklyn accent. I swear, by the end of Arkham City I was one or two more ‘Mista Jay’s away from throwing my computer out a window and pouring undiluted bleach in my ears, but that story’s for another time.

One last thing about Long Live the Queen: If you’re going to buy the game, I recommend you buy it on sale. It’s currently selling for ten bucks, but I think it should be sold for five dollars or less. The problem is that it just doesn’t have enough substance to justify a ten dollar purchase. The content itself isn’t by any means bad, it’s just that there isn’t enough of it.
Long Live the Queen isn’t exactly a game that excels at either story, gameplay, atmosphere, or anything else for that matter, but it is quite a novel experience and I did find it fun, so try it out if you want to see something new.