A great experience weighed down by some major flaws. Nice attention to the game world but not enough focus on playable content.

Assassin’s Creed is an action-adventure game with stealth elements set in the Holy Lands (modern day Israel and Syria). It was released in 2007 for PS3 and XBox 360. A Microsoft windows release followed in 2008. Steam is currently selling AC for $19.99.

Assassin’s Creed follows Altaïr Ibn-Le’Ahad (or Altaïr — no need to try and pronounce that mouthful) as he travels the Holy Land during the Third Crusade. He is working for the Assassin Brotherhood — a very real and very badass organization that actually existed in the 8th Century and fought with Salahuddin’s Muslim armies. Wait Christian demographic, don’t click away! The assassins in the game are less like Muslim black-ops team and more like a neutral non-religious group of peacekeepers who are just trying to do what’s best for the people (while using those awesome blades hidden in their sleeves). Overall religion and the Crusades aren’t really played up and this game treats both religions respectfully. As stated in the game’s introduction, it’s a work of fiction made by an ethnically and religiously diverse team not meant to insult or slander any one group.

So Altaïr is a particularly arrogant master assassin who was sent to Jerusalem to retrieve an ancient artifact hidden under the temple of Solomon. While on the mission, he gets one of his men killed, another an amputated arm, breaks all three of the Assassin’s major rules, and allows a small army of Templars to follow him back home and kill his friends. So in other words, he ends up screwing it all up masterfully. Altaïr’s boss, Al Mualim, strips him from his rank and sends him on a quest to kill nine Templars in order to restore his rank, regain his equipment, and teach him not to be a screw-up.

“You go to place, you stab a guy preferably with your arm-blade, and you run the hell out.”

The game consists of Altaïr traveling on horseback to one of the three cities in the game (Jerusalem, Damascus, and Acre) in order to kill each Templar. Altaïr then learns about his target by doing little side missions. These missions can include lots of things like just eavesdropping on a conversation, pick-pocketing a letter from a courier, or stalking a guy to a dark alley so you can beat him up and interrogate him. The side missions might also include helping out the assassins that are currently working in the city, and this could mean anything from stealthily killing some archers to escorting a fellow assassin to safety. All the side missions give out information about your target, like if he is going to stand his ground if he sees you or if he’s going to run like Usain Bolt on Mario Kart mushrooms. Altaïr doesn’t have to complete all the side missions to move on to the assassination mission and there’s no incentive or bonus for 100 percent completion other than appeasing the voices in your head (that reminds me — does anyone know where someone can get horse tranquilizer, duct tape, and a replica Roman sword online and delivered before the next winter solstice?). After completing the side quests Altaïr can move on to assassinate the Templar. The assassination missions are rather quite self explanatory: You go to place, you stab a guy preferably with your arm-blade, and you run the hell out.

Assassin’s Creed’s gameplay is impressive. Altaïr can free-run around the large open cities to get to his next objective. The game doesn’t have the Tomb-Raider-Problem(™) where one can be unsure if what they plan to jump to is actually a ledge or just a part of the wall texture. Everything that looks climbable in this game is scalable. The combat gameplay is also above average. Altaïr has a sword, a short blade and throwing knives, and, the poster-child weapon of the series, a blade hidden in Altaïr’s sleeve. The sword is supposed be more powerful, but worse at countering than the short blade, but I found that both got the job done just as well. I ended up using the short blade because I thought the kill animations looked cooler and I was able to throw throwing knives at faraway enemies.

“I also have to say that the PC version is rather glitchy for a triple-A PC game that wasn’t developed by Bethesda.”

Now from all the positive feedback I’ve been giving on Assassin’s Creed, it would be easy to assume I liked it quite a bit. Unfortunately the game has flaws and some are really big. The game world is so large, but ultimately empty. No, its not like there aren’t people and houses — it’s just that there’s very little to do other than the main story and very little incentive to do it. This is made worse by the fact that the game world is huge and there is nothing to do while en route to an objective other than go actually go to the objective, which is rather disappointing for a game with such a large world. I also have to say that the PC version is rather glitchy for a triple-A PC game that wasn’t developed by Bethesda. What ended up happening to me was that I just went around the map, making sure that every little thing was done in the most efficient way so that I could get 100% for the segment and move on the the assassination missions without having to worry about the voices bothering me. Assassin’s Creed had fun gameplay, but most of the time the game forced me to do crap I didn’t really care about. The game could have improved with just more things to do in it.

Overall when asked if Assassin’s Creed is a worthwhile experience, I would have to say almost. Assassin’s Creed has design flaws that mar an otherwise good game. It’s average, only barely held in the realm of mediocrity. Good to get on sale, but nothing to go out of your way to get your hands on. 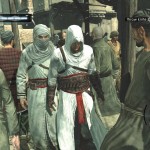 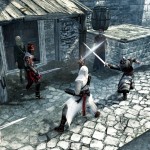 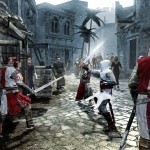 A great experience weighed down by some major flaws. Nice attention to the game world but not enough focus on playable content.