It’s no secret that for the better part of a decade one of gaming’s most iconic poster children; Lara Croft, has been mostly sustaining herself with money profited off of a demographic of men who had recently gained a 207th bone. After a slow decline in the two-thousands and a processions of sequels that the entertainment value of a bottle of Ambien with softcore porn on the labeling the franchise circled the drain before it was presumably taken out behind the shed and put down. I personally put the blame on Tomb Raider’s hiatus on the fact that the series was really just in a holding pattern with each new installment bringing the same boring platforming and combat within a prettier coat of graphics. I think that if the developers chose to go on like this there wouldn’t have been any innovations in the series other than better graphics and a one handed control scheme. Anyways it turned out that Tomb Raider did infact see the light of day again with it’s 2013 re-re-boot (simply titled Tomb Raider) and I have to say it’s a major improvement.

Tomb Raider (the re-reboot that is) was developed by Crystal Dynamics, published by Square Enix and it was released for PS3, PC, and Xbox 360 in early 2013. A new version with better graphics called Tomb Raider: Definitive Edition was released for the Playstation 4 and Xbox One in 2014. This review covers the PC version.

Tomb Raider focuses on the story of Lara Croft, an ambitious young archaeologist who becomes shipwrecked on an island while searching for the lost treasure of some Japanese queen. Once back on her feet after the shipwreck she discovers that the island is populated with a large number of insane cultists and protected by some sort of storm making spirit that prevents her from leaving. Lara must learn to fight off the murderous cultists and defeat the mysterious force that controls the island. It turns out to be an experience that is two parts Gary Paulsen-esque bildungsroman, one part Far Cry 3 ,and one part Uncharted.

When thinking about how to best describe Tomb Raider’s gameplay, the only comparison I can think of is Uncharted. It’s honestly the same shooting and climbing affair done the same way as Uncharted, which is extremely well. The cover based shooting; while generic, was presented really well and the climbing moved away from the old Tomb Raider routine of having the player spend hours trying to distinguish a climbable ledge from a wall texture. Now the climbing is almost the same as Uncharted’s. The game does spice things up a bit with an RPG leveling system and some skills you can obtain to make traversal and combat easier in addition to adding some metroidvana-esque bits for the 100% completion crowd. I suppose in the end I have to say that the gameplay in Tomb Raider is pretty good, partly because Crystal Dynamics did a good job and partly because Uncharted is still looking for it.

I think that Tomb Raider really shines through it’s story; partly because I thought it was well made and partly because I can talk about it in detail without creating a very dangerous drinking revolving around the word ‘uncharted’. The story (as previously mentioned) starts off with Lara waking up shipwrecked on a mysterious island inhabited by an evil cult of castaways. I ended up enjoying the story overall. I can’t say it changed my view on the world, but it did pleasantly kill a nugget of time between cradle and grave and it did make me care enough for the characters that I didn’t notice a few plot holes so I guess it was alright.

Despite my overall positive opinion on Tomb Raider’s story there is one thing I would like to address and that would be the ludonarrative dissonance (oh look at this fucker with his fancy words) ,when gameplay contradicts the story, in the game. I think that the game suffered because of throughout the game the story and the gameplay just weren’t on the same page. For example during a good deal of the game you play as Lara while she is scared, alone, and basically doesn’t have her shit together however the moment the gameplay starts Lara is suddenly able to kick more ass than someone doing the cancan behind a herd of donkeys. Another way shows up is how there are way too many men and guns on the island than realistically possible, considering how they got there. I think that the game would have been better if ammo was scarce, combat was hard, and the game just had a sort of survival-horror-ish feel. That way the combat would have better fit the story and the game wouldn’t have to feel too much like Uncharted (take a shot!). Unfortunately that’s not the game we got so we are just going to have to deal with this.

I suppose that despite some minor shortcomings Tomb Raider is a good game. It wasn’t a masterpiece, but it proved to be an enjoyable experience nonetheless. Tomb Raider is a big improvement over it’s predecessors and I strongly recommend it.

Minecraft: Xbox One Edition handed over to Microsoft for testing! 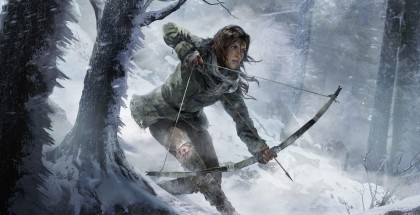