London, 1849, England is ravaged by corporations, insane work hours, and the ever present eyes of their technological security systems and robots. In 100 days Scotland Yard will be implanting the perfect security system for London making crime impossible. I’m not talking about history class; I’m talking about the newest steampunk cybercrime video game from Size Five Games, The Swindle.

The Swindle is a 2D procedurally generated game that requires you character to steal the perfect security system, The Devils Basilisk, from Scotland Yard before it goes active in 100 days. You will start in the slums of London and work your way to the top stealing money and using it to upgrade yourself with better hacking skills and genetically enhanced body parts to get past the increasingly difficult security systems. 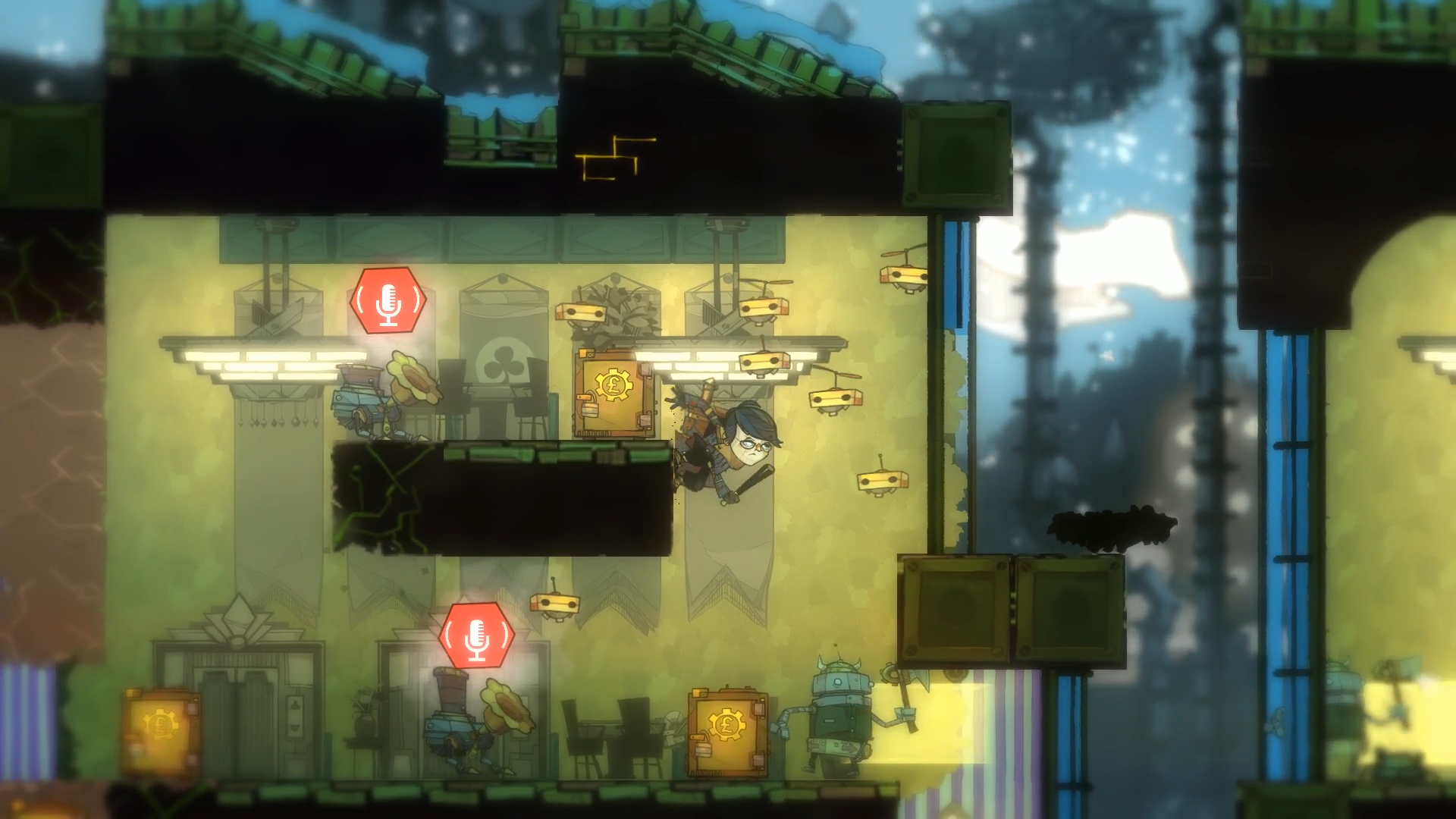 The Swindle brings me back to my memories of the arcades of the past. The character reset with a new design on death just sparks my memory of having three lives for your quarter before it was game over and a new quarter was needed. Developer Don Marshall helped me along with understanding this game and how it came to be with a short interview.

The thing that drew me to the game also was the amazing graphics of the characters, enemies, and the background of every level. “Michael Firman has this crazy unique amazing art style and I knew from the off he’d do the prototype justice. He’d send me concept for enemies or whatever and they were just so imaginative and spot on in every regard.” Marshall said. And he is right somehow the concept of every piece of art fits the theme of steampunk and cyberpunk to the T despite the magnitude of the task.

The simplistic 2D screen movement is complicated by the lines of sight from enemy robots, the games main antagonists. Each enemy has a line of site that the player must stay out of or they robots will notify the police force. Once the police arrive its essentially level over and the money that has been gained for the day is lost.

Every level is different, meaning no matter how many hundreds of times you play this game you will never play the same level twice. This is great in the game never being dull but can be very frustrating at points. If you have neglected such upgrades as bombs some of the map will not be available to you and therefore money will be lost.

But surely the game will walk you through the new upgrades and the most efficient way to use them…right? No, the tutorial you have is the basic explanation of how to use an item and that is it. Marshall said, “My problem with tutorials is they’re like bicycle stabilizers for children that never come off. When I’m playing a game, sometimes I feel like I’m riding a top-of-the-line bicycle to work and someone’s wedged on a cheap set of child’s stabilizers. I’m a grown-up, I like to work things out for myself, and when the game’s shouting the solution at me I feel like I’m just being led by the hand through the experience, never thinking for myself, just walking to where the game wants me to walk and pressing X to trigger the next cut scene. It’s pathetic. It’s not video games.”

The Swindle stands true to this belief for sure through the constant surprises from the enemies. When a new enemy appears and has sparks on it you would never think that when it goes down it will blow up a few seconds later until that happens. Or when playing the game and for the past 100 times the character always stops at the ledge and you think you are safe and suddenly on the 101 time that mob falls off the ledge and discovers you.

“You learn how different enemies have different attacks by watching them, interacting with them, dying by them.” Marshall said. This is what drew me to the game. The fact that it has patterns but those patterns can go out the window sometimes and hard choices for the game must be made.

“The Swindle will generate a room with a computer in you need bombs to access. I see that room and I think “I could get through that wall if I had bombs”. It’s the easiest thing in the world to make sure rooms that aren’t connected by corridors to other rooms don’t have a computer in it, it’s literally two lines of code. But then – where’s the motivation to explore the concept of bombs? I could stop Cameras being generated until you have the EMP to take them out but… that’s the BORING way around. See them, work out what you need to take them out, and buy your upgrades accordingly!” Marshall stressed.

This unforgiving attitude by the developer has frustrated some players who are not use to this kind of game play. I have seen times where it took all my bombs at max to get to the room I needed but to me this was a part of the game and not a glitch or shoddy programming. This game stirs so much nostalgia and present happiness just due to the sheer difficulty and frustration it offers sometimes. 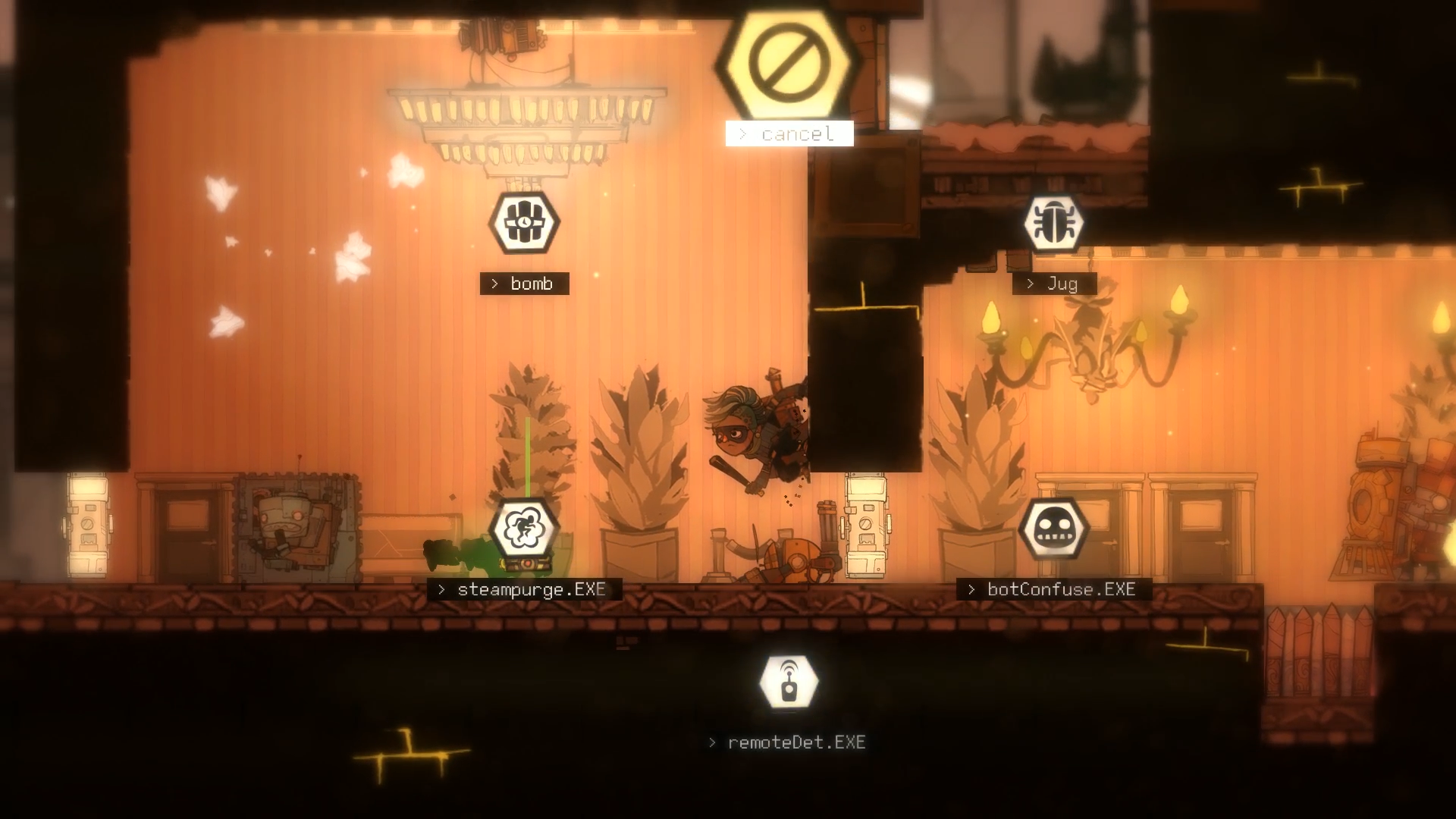 Gamblers be wary because as you upgrade your character. You may begin to feel invincible or overuse a new technique … straight into a trap. So you must upgrade your character accordingly but always be waring. If you do not have enough money or skills you will not be ready to take on the final level and secure the future of your job.

The most constant thing in the game, that most times can be overlooked, is the music. When playing a game that can, and most often is, played in binge fests the music has to keep me entertained, or at least not wanting to tear my hair out. Needless to say I was entertained by the music.

Marshall wanted the music to fit the game, like any good game maker, but that is easier said than done. I mean stop and think for a moment, music for 1800 England, Steampunk, and cyberpunk video game centered on thieving. This was what Marshall asked of his composer. “Can we have something that has a bit of cyberpunk vibe to it?” which as a composer must just be the WORST request to land in your inbox! Tobey, bless him, sent me a piece of music and it was just amazing. Nailed it.”

An observant player may pick up on the fact that the world is ruled by robots from the police to the security systems. So there is a hidden theme of if the Devils Basilisk goes into effect that it will be more than the thieves who are in trouble. But that is just one gamers swim into the lore.The only Easter egg I could glen from Marshall was his own veiled hints at a possible future but if you want to learn any secrets that may be in the game I recommend buying the game and giving it a whirl and wait patiently as the game advances into the steamy skies of London.

World of Warcraft: Why LFR Isn’t as Crap as we Might Think