Not as good as the original, but still worth your time

Disclaimer: Hey, there are spoilers for Telltale’s the Walking Dead Season One here, so If you don’t want to get spoiled click away (preferably to something in this site).

So, while I was writing the ‘review’ for Telltale’s: The Walking Dead: Season one, I realized that the next logical thing to do would be to review it’s DLC and sequel. I suppose not providing my complete views on the series as a whole would be a betrayal to my readers (all five of you). Well that and half crazed Triple Town Conspiracy theory isn’t working out right now. So, without further ado, let’s get this show on the road. 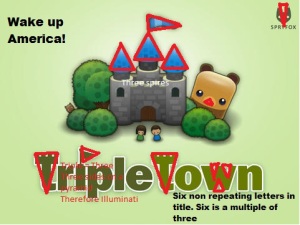 Telltale’s the Walking Dead: Season two is the the sequel Telltale’s the Walking Dead: Season one (chug-a-chug-a-choo-choo! All aboard the 3:10 to Obvious Town, USA). It’s currently available on Playstation 3, Playstation 4, Playstation Vita, Xbox 360, Xbox One, PC, OS X, iOS, Android, and (for some reason) the Ouya; possibly out of some mad desire to make their game as accessible as possible. The story follows Clem as she grows up in the aftermath of Lee’s death in the first season. I enjoyed the first few episodes, but towards the end the shit that Telltale pulled just got ridiculous. Then the non-frantic, split-second, life-or-death decisions followed by the usual “whathaveIdone!Shit!ShitShit!” parts of the gameplay have gotten even worse so honestly I consider this to be a step down from the original.

Now, before we go and spoil the shit out of season two while tearing it a new asshole, let’s just briefly touch on the gameplay. This isn’t really what deserves the spotlight, but it’s an issue, so I guess I should talk about it. In the change between seasons one and two, Telltale changed the gameplay in the more quieter moments from a more standard adventure game set up with some logic puzzles to basically an interactive animated film. The problem with this approach is that it kinda screws the game aspect of the adventure game. Still, besides that and the annoying movement and camera controls that were carried over from the first game, this season still provides the meat and potatoes that are the game’s story and it’s presentation. Which is good… until you find out the meat is a little burnt and might have come from a slaughterhouse in early 1900s Chicago.

Okay, from here, down; is spoiler territory for seasons one and two: 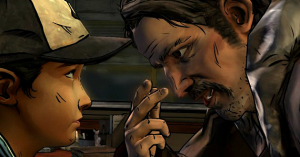 The story in season two is about Clem struggling to fit in with a new group of survivors after being separated from Christa, who lost Omid and their baby after Omid got shot due to Clem’s negligence and the baby miscarrying. The group is being followed by Carver, a creepy pervert who got drunk on power while running his authoritarian post-apocalyptic communit… wait a minute, did they just recreate the Governor? Well I guess they stuck with what works. Anyways, while running from the Carver, the group ends up at a snow lodge, where they meet another group of survivors. Here we discover that Kenny from the first Season was alive the whole time! The groups come to terms with each other shortly before Carver pops out of nowhere and kidnaps everybody, taking them back to his Home-Depot-turned-doom-fortress, where he imprisons them. There we get to see just the Carvenor at is evilest, meet Jane and Mike (two other survivors that Carver imprisoned), and find out what all the 400 Days characters are up to. Clem and some others escape when they co-ordinate a walker attack on the compound by hijacking the store’s sound system. Kenny kills Carver and the whole group either dies or escapes to a civil war memorial. At this point Infinity Ward launched a surprise-attack on Telltale studios, taking control of the desks of JT Perry and Eric Stripe so that they can write in a bunch of Russians to pop out of nowhere and serve as the villains. Unfortunately for Infinity Ward, Telltale managed to repel their invaders and have the Clem’s survivors kill off the Russians after an underwhelming cliff hanger. The final episode drags on for a bit, showing the group almost overcome incredible odds… before everyone, but Clem, Kenny, and Jane either die or run away. The entire series ends with Clem being forced to either let Kenny kill Jane or make a poorly timed South Park reference.

Okay now that I’ve just condensed shit in ways only previously possible with a torrented Alex Jones film and a copy of Win-rar, allow me to explain where Telltale went wrong. 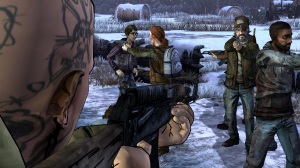 In my opinion, the story suffered from quite a few problems. First off, this season feels a lot less cohesive than the previous one. It feels less like one full story and more like a couple of disconnected segments strung together. Also, I felt like the face-off between Carver and Clem was too climactic to just be one part of the story and in Carver’s absence, Arvo and the Russians just felt underdeveloped. I felt the story would have been better off just focusing on Carver and his community; maybe have episode 3 serve as the means to introduce Clem to the other member’s of Carver’s community, have episode 4 dedicated to constructing a plan to either escape or kill Carver and anyone loyal to him as well as determine which members of the community (including the 400 days people) will be willing to co-operate with you, and have episode 5 conclude with Clem executing that plan.

And then there’s the town – the town. Okay so you remember at the end of episode 4, right before the shootout with the Russians, the group sees a town across the river from the civil war memorial. Why didn’t they go there? Did Telltale just forget entirely about this? I mean it’s surely a better plan than listening to Arvo and going on his trail of tears.

Finally, we have to talk about the end. No, not the final choice between Kenny and Jane, I actually think that was well executed and embodies the most important thing about the Walking Dead stories in general and Telltale’s story in particular: making a split-second decision in a shitty situation where the circumstances are muddy and there is no clear-cut right answer. My problem is the game’s two endings (attempting to restart Carver’s community and joining Wellington) both suck. I just don’t find any fulfillment out of either of them. I know that it doesn’t have anything to do with the endings’ ambiguity or their bittersweet-ness. I mean the first season’s ending was fairly ambiguous and it sure as hell wasn’t all sunshine and rainbows. Lee’s predicament towards the end was essentially getting a shot of Murphy’s law right in the ass and I still think it was good. I guess both of them just feel a little rushed and deserving of an epilogue.

So that’s Telltale’s The Walking Dead: season two; not as good as the first one, but still worth your time.