Pokémon fans were given quite the treat when they were handed all the information that E3 had to offer on June 14th. Though everyone was anticipating a little something being revealed, the amount of information that the footage had to offer was immense. It can be a bit overwhelming, but also very welcome as we explore the possibilities of these new titles.

The first thing asked by the Nintendo Treehouse’s crew was why the titles were chosen to be “Sun” and “Moon.” Throughout the interview, it is explained by Mr. Ohmori and Mr. Masuda from GameFreak that the sun and moon here on Earth play a vital role in the existence of life as we know it. They continue to explain that they wanted the Alola Region to be a region that was “teeming with life.” While this may not give us any plot points that will be in the game, it does give us a theme that will be included – one that will not only tie these games to X and Y, but one that will provide the tone for the game. As many players know, Pokémon X and Y both featured themes of life and death with its legendary pokémon. This theme binds the regions together and provides clues that maybe this isn’t the last we will see of some of our favorite Kalos characters. As for the tone, a theme of life means that the region is going to be one with plenty to do, hopefully. Typically, themes of life add a more jubilant feel to games.

When talking about the legends featured on the package, it was stated that the pair wouldn’t be connected in the normal way – that GameFreak intended to include these legends in a different way than players were used to. This is the first of many times in this interview where players will notice a hinted at or blatantly stated change to the “Pokémon formula.” 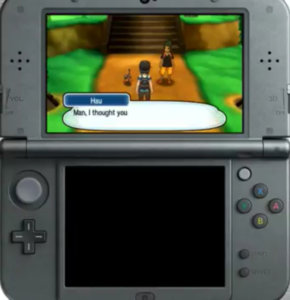 Hau with his litten during the gameplay footage.

If you aren’t aware of the “formula,” as many call it, it is essentially this: all Pokémon games are the same in that the player has a rival who chooses the starter strong to their own, the hero faces off against gyms and the evil organization, the player saves the world from/using the legendary pokemon, and, finally, the player becomes the champion. This isn’t the only thing about Sun and Moon that deviates from what we have come to expect, however. The “rival,” Hau, doesn’t seem to choose the starter strong to the players. In the footage shown, the player has chosen popplio, but Hau has a litten. This would give Hau a type disadvantage to the player. We also have yet to hear about an organization. In this regard, players should be prepared for a new, fresh experience in the Pokémon world.

Speaking of gameplay footage, the player’s room and home was shown, exhibiting the heightened graphics and the masterfully created design in the game. The character’s proportions are stated to be different (as can be seen in the gameplay and in screenshots) to make the hero more realistic. Viewers were also treated to a beautiful lightshow in the background which is apparently how the game will look at about sunrise, showing us that the designers have implemented a transition from day to night instead of a rough jump from one time to another while walking in or out of buildings. 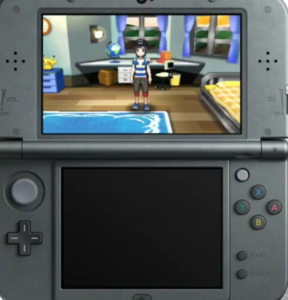 The player’s character standing in the bedroom in his house.

During this gameplay, it is confirmed that pokémon from other regions will be included in the Alola Region, as shown by the encounter with a ledyba. However, this encounter also shows us another more interesting feature: the trainer will be shown behind their pokémon in battles. As stated in the interview, this is to “express the feeling of the trainer always being with his or her pokémon .” This slight change may seem odd as an inclusion to some, but, in a game where the bonds of trainer and pokémon mean so much, it will be nice to see what this adds up to.The battles in the gameplay also reveal other features: dynamic camera angles, different lighting, and a newly designed bottom screen battle menu. The battle menu has obviously had a lot of work done to it. In the gameplay we can see that, firstly, pokéballs get a button of their own now. That’s right. No more digging through your bag for it – now it’s simply a click of the “y” button away. After selecting to fight, the player also gets the chance to click an “i” icon in the top left-hand corner of any move to see what that move does, its category, power, accuracy, and PP. 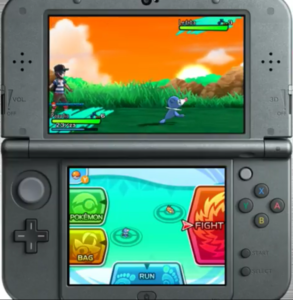 A screenshot featuring the new battle menu and the inclusion of the trainer in battles in Sun and Moon.

This is extremely helpful to new players. Also added to the “Fight” menu is the ability to see if an attack is super-effective, regularly effective, not very effective, or not effective at all after encountering the same pokémon for a second time. This helps because it forces the player to experience the pokémon they’re battling first before providing a helpful reminder about that pokémon’s strengths and weaknesses. The battle menu also has the 2d sprites for the pokémon in the battle on it. Clicking on these will show you that pokémon’s parameters for that battle (helpful if you don’t remember if you used that special move to raise your stats or not). Again, these features are amazing in that they will allow a wave of new players who are still learning, but their use isn’t required if you prefer not to use them.

The dex was also featured a bit in that it has a new feature when a pokémon is registered – it will show you a white pokéball icon that represents the registered pokémon’s evolutionary chain or pairs that are with these pokémon. Interestingly enough, the player doesn’t have the rotom in their dex at the point that the gameplay is featured at (after receiving the player’s first pokémon while venturing to the second town).

New pokémon were also revealed on this date: pikipek, yungoos, and grubbin (the last of which was not shown in the E3 gameplay). Yungoos seems to be the normal-typed poké monthat we will run into abundantly in the beginning of Sun and Moon, much like a rattata in Red or Blue. Yungoos can have stakeout or strong jaw as its abilities. Pikipek is the bird pokémon we will see early on. It has keen eye or skill link and will have two evolutions. Grubbin is a bug-type with the swarm ability. Two of these pokémon (yungoos and pikipek) were shown in the gameplay footage. They appear early on so they will probably be included in many players’ play-throughs.

Another feature you’re sure to encounter while playing is the new trainer battle alert feature. This feature tells you when a trainer near you may want to battle by shadowing your top and bottom edges of your screen. This is an important and interesting feature because it really allows you to play pokémon your way. Want to avoid every trainer you can? Well, okay then. You have fair warning when they’re close, so have at it. Wanna take on everyone in the game without wasting time talking to trainers who you’ve already beaten into a pulp? 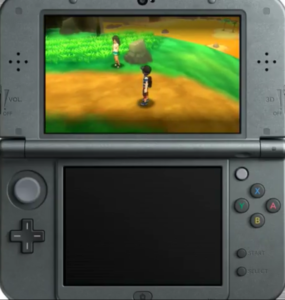 The screen shadowing to warn of a trainer battle.

Well, this save you time too! The trainers are also less statue like in this game. They move, as shown in the gameplay. The first trainer shown will bounce a pokéball up and down as she waits for a battle. Also, they will be included in the battles just as you are! This makes the battles more engrossing which is something the battle system really needed. Upon reaching the second town in the gameplay, the topic of characters arises. On this subject Hala gives you some very interesting information: that each island has its own guardian pokemon. This may act in place of the gyms we are used to seeing or perhaps this is where the legends will come into play – only time can tell. At this point in the E3 video it is also confirmed that Lillie is not a trainer at all, but the Nintendo Treehouse gang does make a comment saying that her bag is “interesting,” which may hint at more that is to come about her and her secrets. Tapu Koko is also mentioned, but it is never made clear who he is. After this point the Battle Royal segment begins and the players are provided a sneak preview of the amazing new battle royal battling style. In this battling style, four trainers take part, each sending out one pokémon at a time. Points are awarded based on number of pokémon left and the number of pokémon fainted by the trainer during the match. The match ends once one trainer is out of usable pokémon. During this section, it is also confirmed that player customization will be making its return in Pokémon Sun and Moon.

This was a ton of information to get in one day – a ton of really amazing information that surely has fans psyched for November to come. With that said, this is definitely a lot of information to absorb, so take your time and let all that sink in, trainers. More is to come soon. Until then: prepare yourselves, trainers. A new adventure has our names all over it and it’s going to be beautiful and immersive.

The Legend of Zelda: Breath of the Wild [News]