A mutiplayer FPS where players must work together to complete a heist. Plenty of hours of content, plus DLC (which you don't necessarily have to buy to enjoy). A great game to play alone or with friends.

If there’s something I value in a games, it’s moments when games teach me something. Spec Ops: the Line taught me that war is hell, Telltale’s the Walking Dead taught me that everything isn’t morally cut and dry, Bioshock Infinite taught me that it’s never too late to right past deeds, and most recently; Payday Two taught me that I am a raging kleptomaniac.

Payday Two is a multiplayer-focused FPS from 2013 with optional stealth gameplay. It was developed by Overkill Software and Starbreeze Studios, with additional DLC work by Lion Game Lion. Payday Two was published by 505 games and is currently available on Microsoft Windows, Linux, PS3, and the Xbox 360. An enhanced version for PS4 and Xbox One, subtitled ‘The Crimewave Edition’ will be available in June of this year. This review covers the PC version, which is currently available on Steam for $29.99. A game of the year edition that includes all DLC released at the time of this writing is also available for $79.99, though if you’re willing to drop that much money on a single game you’re probably able to get more enjoyment out of actually robbing a bank and then bribing the local law enforcement to turn a blind eye when you inevitably get caught.

So, the setup of Payday is pretty simple: you play as a member of a team of four criminals who are trying to perform a heist, whether it be a bank robbery, burglarizing a museum, or defending an old house from waves of police officers while simultaneously trying to cook meth within (kinda what I imagine a cross between Tom Clancy’s Splinter Cell: The Siege and Breaking Bad would be). Players will find themselves doing jobs for some of the most dangerous criminals known to man: black market arms dealers, Russian mobsters, Mexican drug cartel members, and even a politician.The game ends up being an incredibly fun multiplayer experience thanks to good gunplay, well executed stealth, and partial level randomization that makes each play-through that much more difficult and fun. 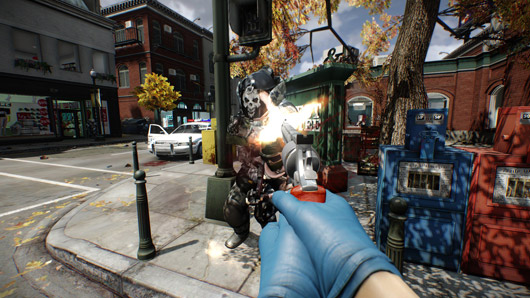 At it’s core, Payday Two is an FPS; an FPS that leans towards stealth and automated drill repair, but an FPS none the less. The combat itself doesn’t do much to raise itself far above mediocre; you aim down your sights, shoot everything that moves, and duck behind cover when things go to shit. Still, The game is well presented and unique as there aren’t that many shooters that focus on a team of four defending themselves against waves of armed NPCs, among which include special units that do quite a bit to spice things up. The aforementioned special units include the sniper, who finds a nice place to camp somewhere in the skybox and picks away at you with a sniper rifle; the shield, a time traveler from ancient Sparta who still thinks shields are effective in combat; the dozer, a beef-cake in a bomb defusal suit; the taser, because… uh… he carries a taser… and the cloaker, who is, without the need for further explanation, literally Satan. The gameplay usually consists of hunkering down in a location while being practically bathed in platoons of SWAT and police, with the previously stated collection of bastards sprinkled in there to put the edge on. The game also uses partly non-regenerating health system and has rather limited amounts of ammunition available to the player; making it more challenging than the usual hand-holding, Wolverine-healing-factor-having, patronizingly easy shooters of this day and age.

So the typical Payday heist starts out with the players selecting their equipment and planning what to do next in a lobby while they wait for all four players to join. Players of the previous game will be disappointed to hear that you can no longer choose which character to play as in the lobby; now, you pick your one preferred character in the main menu and if someone else with the same character got into the lobby before then you can pretty much go screw yourself. Fortunately, there are now six  new playable characters to choose from (Three of the characters are free, two are unlocked with DLC and the other one, Jacket, is only playable for owners of the Hotline Miami Two Digital Deluxe edition); including the deadly mob hitman and PETA affiliate John Wick as well as everyone’s favorite chicken-mask-wearing mass murder, Jacket from Hotline Miami. Anyway, once after a period of waiting the host will wake up from a coma and finally ‘start’ the heist. Once that happens you’re taken to another lobby, an uber-lobby if you will. There, you can use the preplanning function and see what equipment you and your crew will be bringing to the heist, thought that’s not really relevant for new players, so for awhile it will be just another lobby for you to sit through. Once all four players hit ‘ready’ the game begins for real. 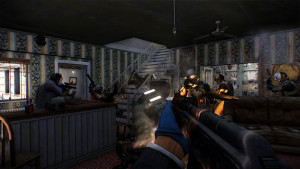 The moment to moment combat (or at least the moment to moment gameplay you spend actually playing, because the whole matchmaking system is a bit of an ass) is pretty intense by the standards of modern FPS games. It mostly consists of defending a location from waves of police and SWAT units while simultaneously trying to accomplish a task. This task can be anything from trying to get loot bags from point A to point B, defending a computer that’s being hacked, or as most of you have already heard: defending the world’s most worthless automated drill. This means that while police are trying to leave you with more holes than an anti-vaccination essay written by a drunken chimp (or even worse: an anti-vaxxer) you have to go back to your drill every so often to make sure that it hasn’t jammed. This manages to elevate the experience from a shooting gallery to something with a little bit more depth. Couple that with the more hectic moments when you got to secure your loot bags or a crew member runs straight into a cloaker while chasing a butterfly or when you have to fight one of those damn Adamantium-plated automated turrets and you get a really challenging, really fun experience

And of course, there is something to be said about the stealth. Although I find it to be an extraordinarily delightful experience there are two problems I have with the game’s stealth. The first is that unlike games that are focused around stealth, such as Metal Gear Solid or Dishonored Payday Two was meant to be played online, with other people. Because of this, the game isn’t really into the whole entire system that single player stealth games have where if you get caught you have the chance to hide in a corner and suck your thumb until all the guards forget about you entirely like someone did a jedi mind trick on them while you weren’t looking. 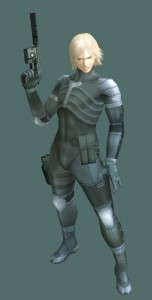 This is not the protagonist you are looking for.

If you screw up in Payday Two however, (provided it isn’t the Shadow Raid or Car Shop heists, those are all stealth, all the way), the game just reverts back to guns blazing mode whether you like it or not. At that point, you have to either stick it out or restart the game. And that’s where other people come in, because then you have to get other people to agree restart and ugh… people. And then there’s the issue of how the stealth is geared towards a multiplayer experience. There are all these little things that just make solo stealth very difficult, like how you have to spend half a minute stationary and defenseless after you kill a guard in order to answer his pager and bag is corpse or how loot drop off points are located in a distant far off point of the map, forcing you to run around a lot. That’s just the small stuff, really (and to be fair I actually like the pager mechanic because it adds a lot of tension to the experience). There are far more annoying things going on; like how you have to enter two key cards almost simultaneously if you want to enter the vault in the Shadow Raid heist, basically preventing a single player from cleaning out the level unless they get very lucky or how a single player can only hold six cable ties, forcing them to start killing NPCs that might otherwise call for help faster than the player can say ‘No Russian’, which results in a small penalty. In my opinion, stealth is far better without other kids pissing in your sandbox, but then again that’s just me. Despite all this, I found all of the sneaking around very enjoyable. The only other complaints that I have about the stealth are that the Go Bank heist’s stealth playthrough frequently glitches and that there isn’t a way I can tranquilize guards, place all their unconscious bodies in a single broom-closet, and then imagine the hi-jinks that will ensue when one of them eventually wakes up. Nevertheless, my final consensus on the stealth element is that it’s pretty damn good.

By far the most disappointing part of my experience with Payday Two has been matchmaking. I think that the matchmaking system is, while visually stimulating, not very useful if you want to play one particular heist on one particular difficulty. Basically lobbies and opportunities to host your own lobby pop up at random, unless you want to pay a fee (with in game money, thankfully) to cherry-pick the heist you want to play. I get why the developers are doing this, I just think that it could have been carried out better. 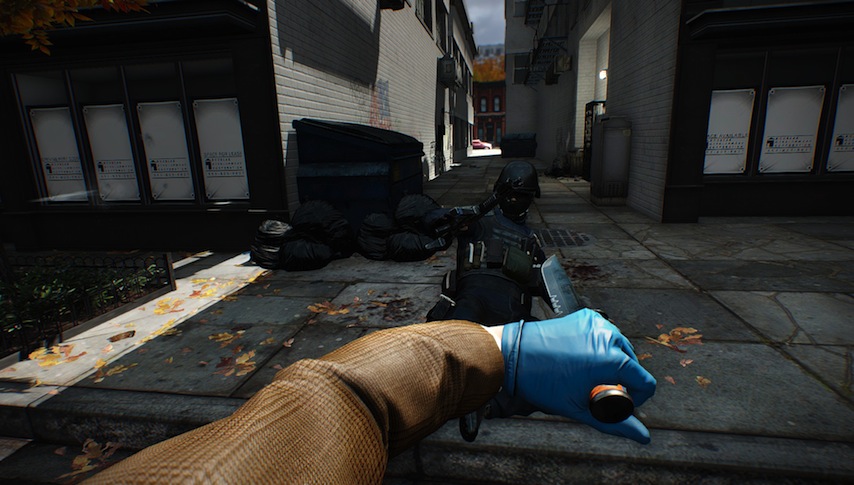 As I mentioned before this game has a Game of the Year edition on Steam that costs usd$80,and that’s a good deal considering that if you were to buy every piece of DLC alone it would cost you one hundred dollars. Now if you are considering not purchasing Payday 2 because of this, I understand your sentiment, but I think you’re wrong. While I think the developers are being ridiculously greedy with the amount of premium DLC they’re putting, the vanilla version of the game still stands as a complete game. Yes it is frustrating to see half the weapons and mods being locked behind pay-walls, but the stuff that you do have access to does still amounts to a reasonable amount of content to ask twenty dollars for. Also it’s important to note that you can still play all of the DLC heists, provided that someone who owns the DLC is hosting the game.

One final thing to touch up on about Payday Two – the glitches. The game does often crash to desktop, freeze up, or just shut itself down without warning. If you’re a fan of Bethesda then you’ve probably already built up a tolerance for this stuff and it isn’t a big deal, otherwise caveat emptor.
So, I guess I have to say that Payday Two is a great experience. It’s a great game to play with friends, strangers, or by yourself. There’s a plethora of content and the developers will keep adding new premium and free content up until at least 2016. I’ve personally logged about 100 hours and there’s still quite a bit of life left in the game without including DLC or the next free content update. It’s Definitely worth your money.