Superheroes. A personal obsession of mine, and countless others among us. Nearly everybody has a favorite superhero. So, California-based Developer/Publisher company Gazillion Entertainment thought they’d let us play as those heroes. Those from the Marvel universe, anyways. And… it works. Really well, in fact. Marvel Heroes 2015 is a action RPG that utilizes that familiar top-down Diablo style game play. The formula has been used time after time, but it’s a good thing it never seems to get old. Marvel Heroes is an absolute loot-fest, with tons of equippable gear, collectibles, loot chests, and instances and events galore.

it’s been a good month for Marvel Heroes. we’ve recently seen the addition of yet another new character, Vision, and the new achievement system has been implemented. We also have a new team-up, Quicksilver. The Age of Ultron event content is finally coming to an end (although we can still play the Age of Ultron raid instance at any time) and the BOGO event for heroes and costumes is over. But never fear, there’s still some new sales and events to check out, and a few major bugfixes. 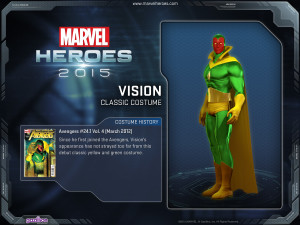 The majority of the fixes in this patch were to address minor annoyances that were plaguing the achievement system. This makes sense, however, as the system was just recently put into the game. There was also a few fixes to some of Scarlet Witch and The Vision’s moves, which were behaving buggy as of late, and some issues with the Quicksilver team-up were also addressed.

As for sales, the Avengers Mystery Boxes are still up for grabs. It’s probably the best random bundle I’ve seen in the game so far, giving a random hero or costume with every purchase as well as uniques, collectibles, fortune cards, boosts, and more. All team-up heroes and pets are currently available for 25% off. A new addition to the shop, cosmic mystery boxes are also available, which are somewhat comparable to the Avengers boxes. 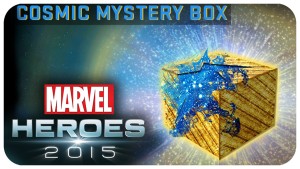 Currently, there is an event rotation in progress. For the 14th and the 15th, you could compete in the Omega Event to get Omega Access Files to trade for special exclusive items, which includes a super-badass Phil Coulson team-up. As of the 16th, the current event is Cosmic Chaos. Shared quests, patrols, and daily rewards grant you cosmic worldstones which you can trade for a wide assortment of rare, useful items that you can’t get anywhere else. Next up in the event rotation is Midtown Madness Monday, a great time to grind some characters and get some rare loot. Get questin’ if you want those rewards, heroes. 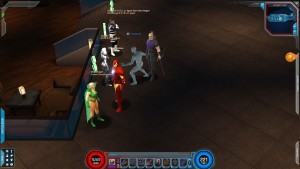 Don’t forget about your trusty event vendors. Find them at the western side of Avengers Tower.

Marvel Heroes 2015 is widely hailed across the interwebs for being one of the quickest-improving MMORPG games available right now, especially for a free-to-play. Within the next few weeks, we’ll surely see a new update, with new content and events to wade through. Supposedly, Dr. Doom will soon be playable, alongside Ant-Man and Iron Fist. There’s always something to look forward to in the world of Marvel Heroes. ‘Til next time.