The hostilities between PS4 fanboys and “Xbros” are akin to the relationship between the Alliance and the Horde (Lok’Tar!). While everyone here at Slashskill is a die-hard Hordie, we still bicker about which side we pitch in for, in the great battle of consoles. So, for your sake and ours, I plan to help everyone pick the system that would benefit them the most, if you’re still on the fence that is (you choose-y bastards).

Number one, what we have to look at is Hardware and the specs of the consoles themselves. Do you care which one has the better specs? Are you that much of an elitist that you absolutely have to have the best specs and the bragging rights along with it; or are you one of those guys that really don’t care and want to play games. And with actually playing the system in mind, we also have to think about what kind of exclusive titles each of these titans hold within their armories. Oh, and lest we not forget comfort. Controller design has to be should be a big point you bring up in your decision making paradigm.

So, with that; Let’s get into the nitty gritty. 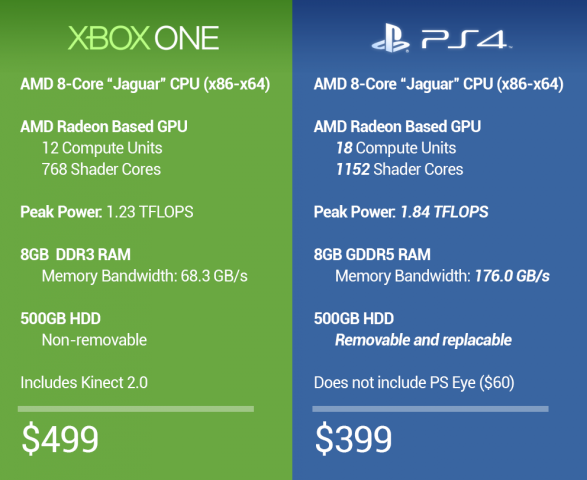 Alright, alright. I know what you’re thinking. It’s probably something along the lines of ‘what in the hell is a TFLOP?’ or even, ‘what is a Shader Core?’. Well, I’m here to make this easier on you, and hopefully learn something in the process. Let’s break it up.

These two guys have literally the same CPU. So, the systems have the same amount of computing power when sat side by side.

AMD Radeon Based Graphics Processing Unit. (At least they have good taste in hardware)

The PS4 comes out on top in this bout, beating the Xbox One in both Shader Cores and Compute Units. What does this mean? It only means that the PS4 is going to be able to render more items and pixels on screen than the Xbox One. This is all up to you though, I’ve seen both systems and they look equally fantastic.

So, what exactly is a TFLOP? (straight from dictionary.com) A Teraflop/TFLOP is a measure of computer speed, equal to one trillion floating-point operations per second. “Well, what’s a FLOP?” More links! ; But to sum it up simply, all that really means is who sucks the most power from your wall. Here’s a link to help you see that in a deeper perspective.

We all know what ram means. Speed. Speed is great, but what are the difference in the types of ram? DDR3, which is what the Xbox uses, is what is most commonly used in computers. It’s best used when handling small amounts of data quickly. This is where the PS4 blows the ever loving hell out of the Xbox one. GDDR5 ram handles massive amounts of data crazy fast. While many games now, don’t really push this system to it’s limits, the PS4 is ready for improvements within the game industry in the near future while the Xbox one will be left behind.

It’s a hard drive. Memory. Game saves, purchase history, themes, music, files, video, files files and more files of any shape and size. Not to mention, both of these systems have 500GB worth of sweet sweet memory to play with. The only difference is that one system has one that can be removed and replaced while the other one can’t. 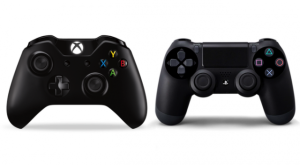 Remember back in the good ol’ days when you went over to a friend’s house to play some Smash Bros., or even some Halo; you walk through the door, raid the kitchen, you head to your friend’s room with cans of soda and bags of chips galore, you sit down in front of the tv, and your friend hands you this god awful looking monstrosity that has 40 different switches and buttons and at LEAST three sticks on it? Fortunately those days are long since over, but it still brings me to my next point. Controllers matter. Go to a game shop and ask to hold one, or hit up one of the displays they might have. Just make sure you try before you buy. If you hate the controller, you will hate yourself for spending the money. Personally; I enjoyed the old school Gamecube controller, and the PS4 controller feels very much like it.

With the recent drop in price for the Xbox one, it levels the playing field with the PS4 substantially. The Xbox one still has the Kinect that comes with it, so you are essentially getting more bang for your buck.

Here is where it really boils down to personal choice. Exclusive titles. These two guys love their exclusives just about as much as they love fighting about them. Here’s a list (even though it’s IGN – blegh) that displays all titles currently planned to release for these two consoles. In sheer number, we have to give the benefit to the PS4. Though, like I said, it’s completely up to personal preference in this aspect. [Halo, or Uncharted? Rise of the Tomb Raider, or Witcher 3?] 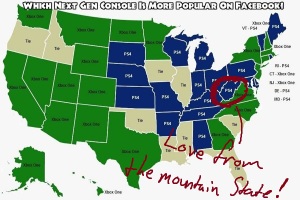 Finally, you have to be comfortable with everything that comes with the console, not just the controller, or even the exclusives, but the culture as well. Do you enjoy the people that use the systems enough to play online with them? Would you feel comfortable with those guys on your team? hell, would you even listen to them on forums when you ask about an issue with your console?

All of these factors should be present when you make your decision to purchase one of these consoles. I know that I asked more questions than I answered, but all of the questions that I asked should be answered fairly easily. I hope this article simplified the fight between the two, and helped you finally choose which side you plan to go with; either for personal means, or for a gift this holiday season. But don’t just rely on me to help you make this decision. Do your own research, knowledge is power, after all.