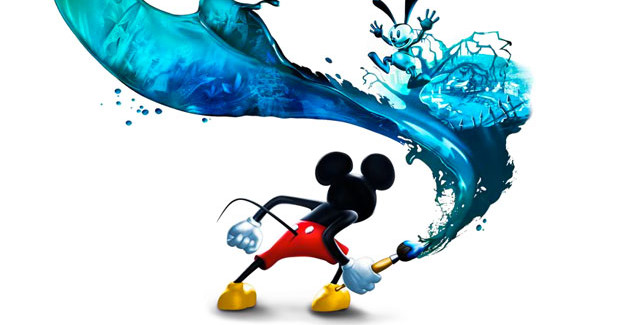 Greetings one and one! It’s so nice to see you again! Here’s something I’m sure we can all relate to, and that would be playing a game and LOVING it, despite other people saying that it’s terrible. Now, before I get to the list that will inevitably cause frothing at the mouth from people with differing opinions, keep in mind that this list is only from games that I own. I’m always open to discussion, but let’s try to keep it civil my dear fan, shall we? 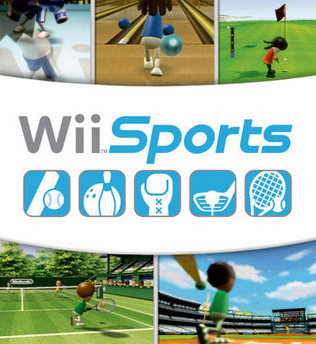 Fun for the whole family.

Right off the bat we start with a game that will make all the ‘HARDCORE‘ gamers cringe: the Wii’s gimmicky, casual, pre-packaged “LOOK AT WHAT OUR SYSTEM CAN DO” game! This game is actually so much more than that, so let’s get into that, shall we? This game was originally created just to be a casual, fun game that came pre-packaged with the Nintendo Wii and it turned into a game that basically anybody could play and have fun with, provided of course that they weren’t elitist jagoffs who turn their pimply noses up at the mere mention of casual gaming.

From my personal experience, I had a blast playing this game, especially because it was something my whole family could play together and just have some fun with. You don’t really find that many games with that quality these days, so having one like this is a real treat. Among all the minigames, easily the most fun is Wii Boxing, because it’s just mindless fun, and if you get into a fight and really go at it, it’s actually a good workout.

Plus you get to punch Chad Kroeger in the face. What’s better than that?

Wii Bowling was also a crowd favorite, although I’d love to push that one under the rug, seeing as how I’ve yet to actually hit a damn pin playing it. I get more gutter balls than my half-blind and hideously uncoordinated best friend. That’s saying something.

All in all though, this game is seriously looked down upon by so many ‘hardcores’ but frankly, I feel that said sentiment is highly unwarranted. The game is simple, funny, entertaining, and can be an excellent way for people of all ages and walks of life to be able to just connect and have a good time, we really need more games like this. 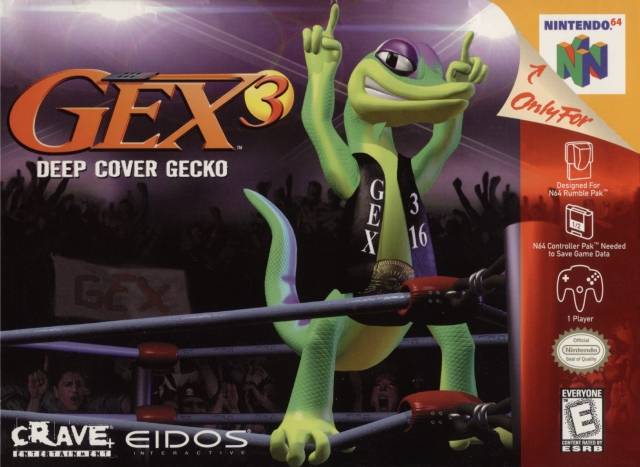 Seriously, I love this game.

An oft-forgotten gem of the fifth generation platforming craze, overlooked due to shining stars such as Spyro, Banjo-Kazooie, Donkey Kong 64, Super Mario 64 and many more, this game is a lovely little romp through various pop culture references and parodies that even a kid can get (or at least cackle at like I did).

The basic premise of the game is that Gex, the titular character wakes up to find that his spy partner Agent Xtra has been kidnapped and trapped in the ‘Media Dimension’ so naturally Gex reluctantly and sarcastically runs off to save her, making his foray into various worlds that are made up of ridiculous and mostly timeless pop culture references. The dialogue in this game is just so cheesy and fun that one can’t help but enjoy every minute of it. While people will complain about dated graphics, clunky controls and great gaps in difficulty at times, all of these things are easily overlooked when you just look at how silly and fun this game is. It’s no secret that I love a game that doesn’t take itself too seriously, hence my childhood obsession with Banjo-Kazooie and Tooie, and this game satisfies that sort of comedic hunger that I yearn for. I’ve played and beaten this game countless times, and honestly it never gets old. From the crazy levels and silly costumes Gex puts on to the random quotes and references he pulls out of his ass, I can’t help but put this game on the list. 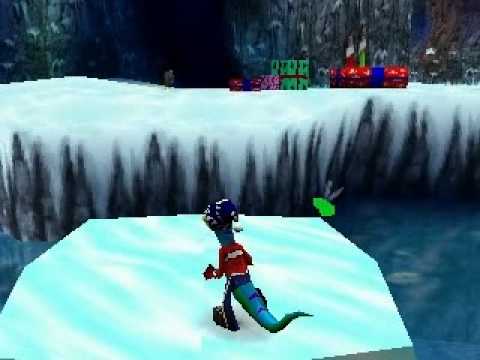 “My nipples feel like snowpeas.” ~ Gex literally two seconds into the first level.

Some will say, “Oh, but Bazzlie, there are so many better platformers from that era to choose from! Why Gex 3?” To which I respond by questioning who gave you the right to question my authority, and then proceed to answer by mentioning that this list is a list of UNDERrated games, and this one is criminally underrated. Seriously, give it a try – you won’t be disappointed; and if you are, we aren’t friends anymore, so go away.

Actually wait no, please don’t, I need my readers. 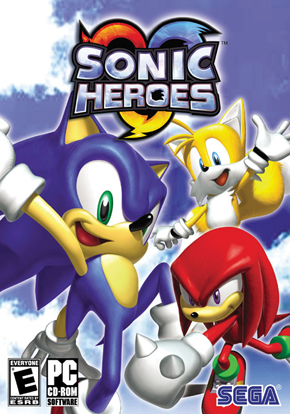 Oh Sonic, how the mighty have fallen.

Now, here’s a game that immediately captured my heart the first time I tried it out. I just felt like it was so fun and unique, possibly the last great Sonic game in my opinion. It was just fun being able to try the different styles of play and figure out how to overcome obstacles and get through the levels as fast as possible. The levels were all pretty fun in my opinion, with a fun little story that wasn’t anything convoluted and obnoxious like most of the Sonic games that came after it. If anything, it’s storytelling hearkens back to the Sonic classics, just go through the levels to get Eggman. It doesn’t really have to get any more complicated than that when it comes to Sonic games if you ask me.

Now, this game’s detractors will often complain of the inflated vast, the clunky, glitchy controls, and the handful of frustrating levels; but honestly, the cast isn’t at the point where it’s obnoxiously inflated just yet. The clunky and glitchy controls are honestly not a huge problem and they tend to get blown way out of proportion by people who take the tiniest little thing seriously – because god forbid they ever die in a game, right? I will admit though that there are a few levels that are frustrating, but honestly, isn’t that what we signed up for? If games were easy-peasy we wouldn’t bother playing them so damn much, right? Right. 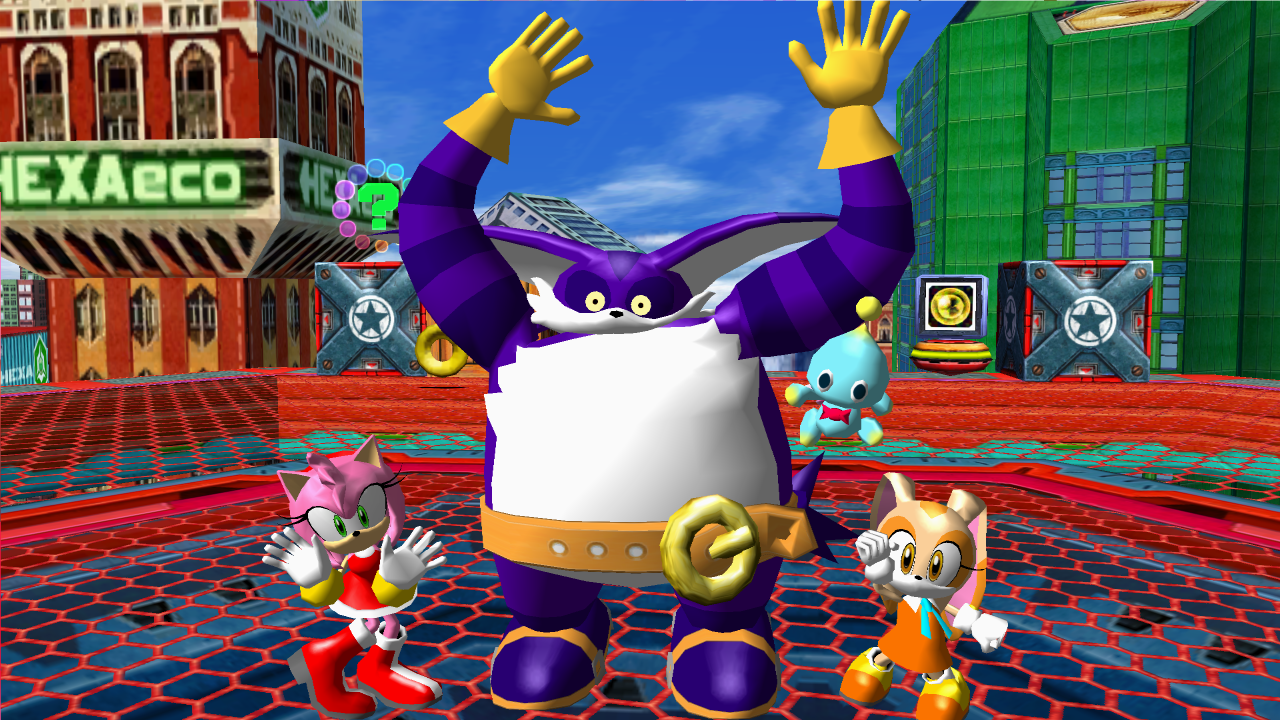 Clearly the best and most difficult team in the game. 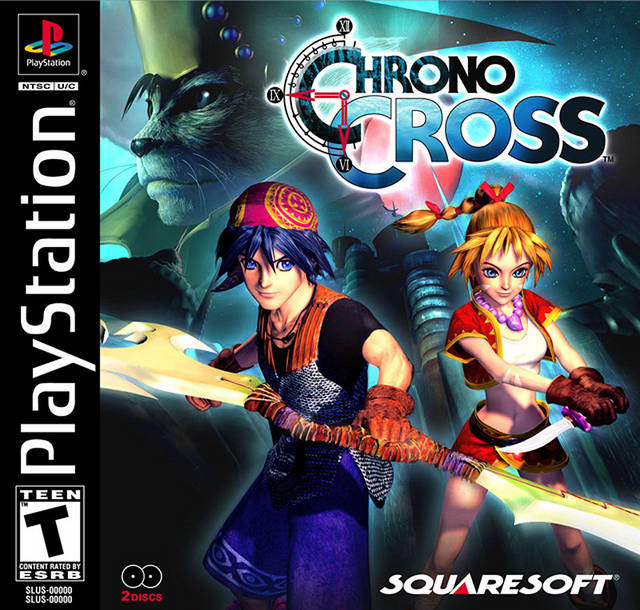 The forgotten star of the Playstation lineup.

People will often compare ChronoCross to it’s predecessor, ChronoTrigger, claiming that it’s just a poorly thought out, convoluted sequel with too many pointless characters. To that, I respond with a swift kick to the shin and a poke in the eye. I also respond with the counter-argument that when you look at ChronoCross as more of a standalone game, it’s got a lot of merit to it. The story is engaging, the characters (though obscenely numerous) are all unique and fun, most with varying strategic play-styles, and the cut-scenes are actually quite impressive for Playstation 1. One drawback is just that the main character is your typical silent, personality-less protagonist, but honestly, that just serves to make the supporting characters that much more vibrant and interesting. There are literally 45 different characters you can play with, and each one is unique in not only their personality, but their story. Some, of course, are simple stories, whilst others are actually key characters. 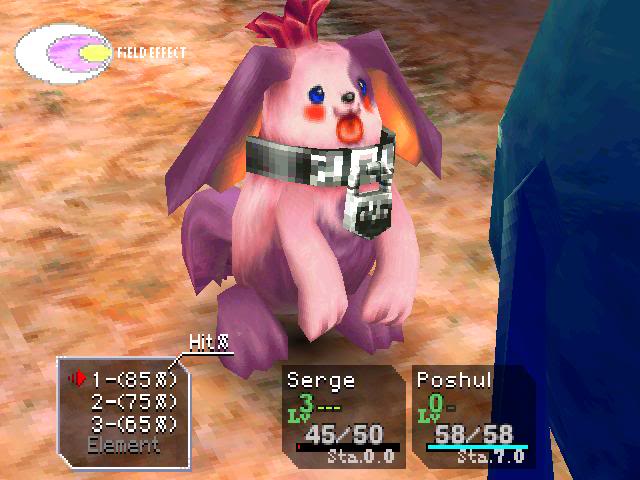 While of course, the game has it’s drawbacks, such as a ridiculously complicated battle system, the sometimes hard to figure out objectives, and the plot hole filled storyline; these things are easy to overlook though when one considers the sheer number of possible team combinations to experiment with, the uniquely challenging bosses and fun little side-quests that can keep you running around for hours, and most of these reward you with yet another fun character to try. This game has endless replay value and is chock full of humor and things to do and see. I highly HIGHLY recommend giving this game a try, especially for any RPG fan looking for something unique. 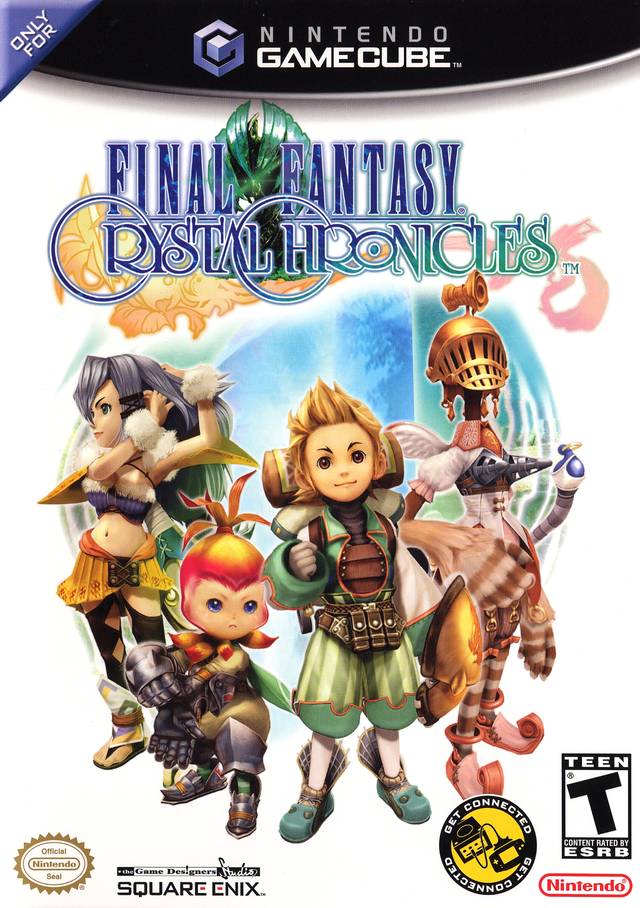 Prepare for the usual screaming from the *SERIOUS* and *DEVOTED* Final Fantasy players.

Here we go, the #1 spot. This game is a personal favorite of mine, and an object of scorn among much of the Final Fantasy fanbase. I never really understood why though. Sure, it has repetitive gameplay, an awkward leveling system and limited character options along with having to use Game Boy Advances and GBA to GCN Connector Cables to play multiplayer, it’s strengths just far outweigh it’s shortcomings. The music alone in this game is incredible. Whenever people mention video game music, I always think of Crystal Chronicles, literally every song is a masterpiece, even the menu themes. The gameplay, while a little stale when you play it solo, becomes incredibly hectic and fun when you add one, two or even three friends to play with you cooperatively. It’s just a fun game to sit down with friends and play through over the course of a a few days. I think I may have beaten this game with all 32 character designs you get to choose from with a few repeats of my favorites, and it really never gets old. The level design is gorgeous, the boss fights are fun, and it’s rather simple story has an incredibly amazing and satisfying conclusion. 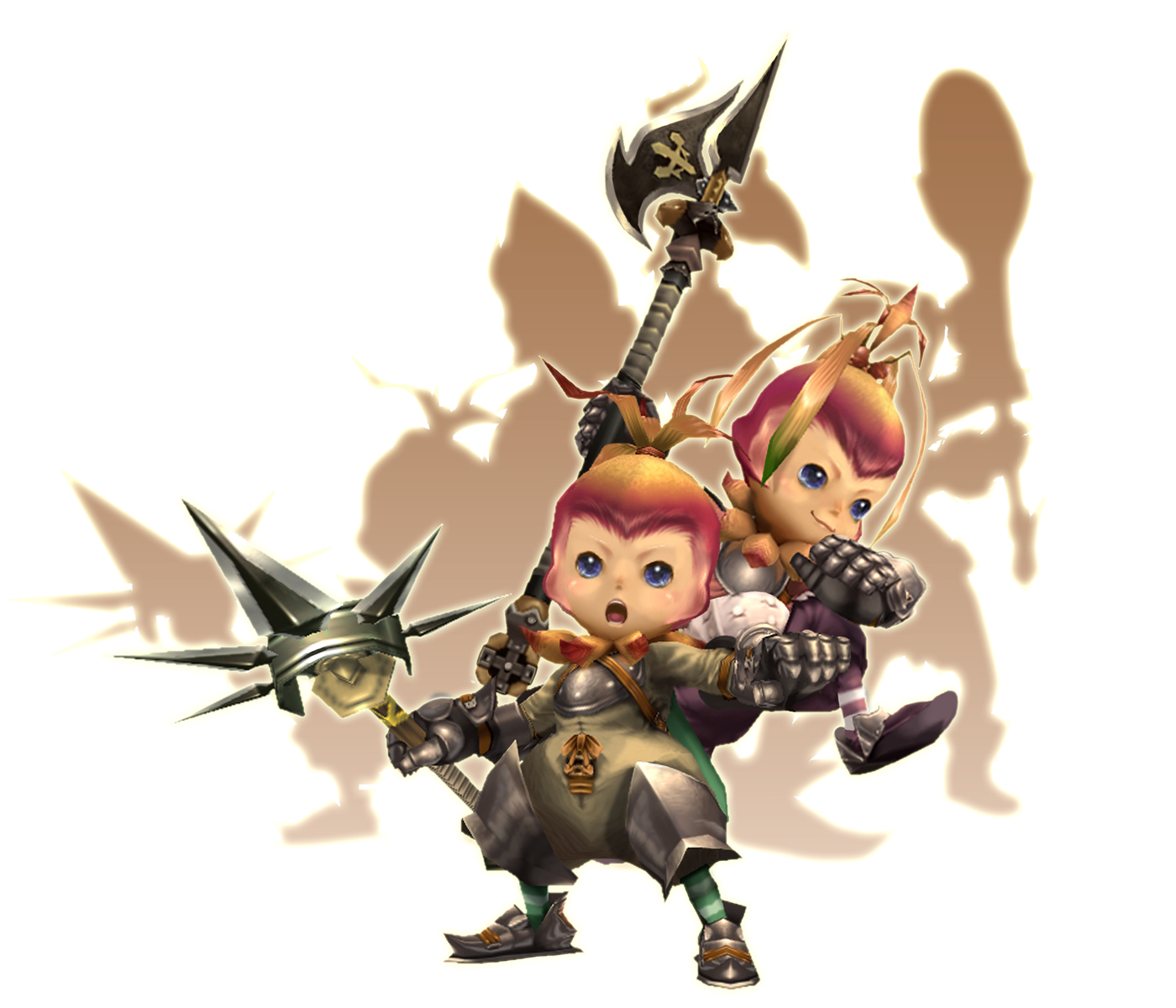 Also, these adorable characters are the tanky melee characters in the game. You really can’t go wrong there.

Now, while I can recognize the issues with the game, it just seems like ninety percent of the problem people have with this game is that it’s ‘too different’ from the main final fantasy game series, but like ChronoCross, if you look at it as a standalone game, it’s actually very impressive, and holds up quite well even today. Seriously, if you ignore all the other games on this list, (well, first of all, ouch) at least try this one out, I guarantee it’s worth your time. Keep in mind though, that it’s much more fun with a friend or three. So pick it up, give it a go!

That my dear friends is the conclusion to this list, I hope you all enjoyed reading it as much as I enjoyed writing it, now go play some games!