Dissidia Final Fantasy: Will the PS4 See a Release?

Dissidia has always been an interesting game to me. I always wanted to have a game with Final Fantasy characters beating the crud out of each other, but I never had a PSP so my life sucked. That’s why I have some good news for Dissidia fans today! We may be seeing it come to PS4 in about a year! THE EXCITEMENT IS OVERWHELMING FOR ME.

So for those of us that may not know too much about Dissidia Final Fantasy, let’s dissect it just a tad bit. Dissidia is a fighting game with action RPG elements thrown into the mix. You can control many different characters from various Final Fantasy worlds and have them beat the crap out of each other. This specific game is going to be a reboot and not a continuation from the last Dissidia games. The battle system this time will be three-on-three instead of one-on-one, which should bring a cool twist to this version. Over 50 characters will be available in the game, but some will only be available post-release. 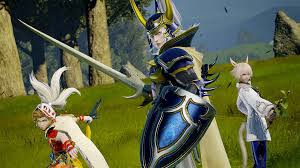 There was also a trailer released showing a few of the characters available, including Cloud and Lightning, and Ifrit is showcased as well. If you want to view the trailer, it’s linked above. This seems like a really good direction for Square Enix to go. The Dissidia games have shown a lot of success in Japan and in the US. When the game is released, it’s going to start out as an arcade game in Japan for around a year, and it does seem pretty likely that a console port could be on the way. I see no reason for them not to port it over, this little gem should sell like hot cakes as long as they take the time they need for it. Square will partner with Sony Computer Entertainment Japan and the publisher of Dynasty Warriors, Koei Tecmo, to bring this game to light.

So how do you feel about another installment for the Dissidia games? I see no reason for it to flop, but time will only tell. Hit the comments section and tell us how you feel about this potential release!