Boring third person shooter that could have been good if it focused on improving the story and game-play instead of mucking about with a voice recognition gimmick.

Rarely do we ever see such an example of massive potential pissed away by people who have no clue what they’re doing than with Binary Domain. It’s a third person shooter about a special forces group fighting robots in a cyberpunk Tokyo while trying to uncover some sort of conspiracy about synthetic humans and an evil corporation. I would imagine that would be harder to fuck up than a razor-lined vagina, but somehow the people at Sega managed to pull it off; successfully creating an experience that despite all it had going for it while it was being planned, turned into a boring ten-and-a-half hour long snooze-fest in execution.

Binary Domain is a third-person shooter developed and published by Sega and released in 2012 for the PS3, Xbox 360, and PC. It is currently selling on Steam for $14.99. This review covers the PC version. 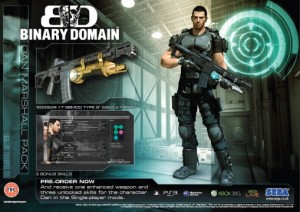 I never bought this, but I’m pretty confident that it gives you a set of golf clubs and a magic remote.

So it’s the future, the year 2080 to be exact, and the world has advanced robot technology and Japan has turned into an isolationist technologically advanced superpower and… you know what, I’m not going to recite this, it’s not even that important to the game. Basically the most important thing you need to know about the story is that you play as Dan Marshall, an elite special forces soldier who moonlights as an Adam Sandler look-a-like, and his band of post-Star Trek politically diverse and ethnically correct planeteers must navigate their way through the most half-assed cyberpunk interpretation of Tokyo to  arrest some businessman who is responsible for making Blade-Runner-like androids. During the course of my playthrough I had discovered that I hated all of the characters, found a couple of instances where people’s actions made absolutely no sense, and that the plot was just an excuse send me on a long walk through hostile territory. The game ended with one big exposition dump delivered via a cutscene of Kojima proportions followed by a boss fight. Overall I thought the story was a waste of time. 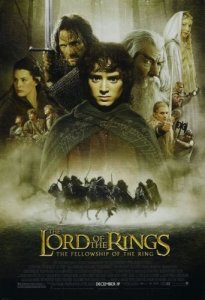 That was only cool that one time guys!

Overall the gameplay isn’t much to write home about. It’s your generic Gears of War 3rd person shooter setup hampered by some awkward controls and a UI that can go fuck itself. This was probably not as bad in the console version as it’s rather obvious that the PC port wasn’t all that well done. Besides some commendable enemy designs (I found the work on some of the robots very creative and well-executed) I didn’t find the combat interesting. It certainly wasn’t bad, just mediocre and I don’t think mediocre is worth my time.

Perhaps one of the things that turned Binary Domain into a fetid mountain of suck was the inclusion of a rather obnoxious gimmick – voice commands and the trust system. Basically you’re supposed to bark commands, compliments, and insults towards your in game squad in order to build trust with them. Leaving out how stupid of an idea it is to sit on a couch in an empty living room and talk to virtual people; I didn’t like this idea. First off, people who don’t own microphones or don’t want to participate in this idiocy can pretty much go fuck themselves, because the alternative involves using some uncomfortable button controls to select one of the three pre-baked options; ranging from normal person to mute to socially-retarded-asshole. Seriously though, if the only dialogue options you have for the player to choose from when commenting on how their ally just took down a robot that was trying to use your face as his own personal fleshlight are silence and something along the lines of “good job” and “fuck you” then you haven’t spent enough time with humans to understand our speech patterns.  Furthermore the option to use the pre-baked dialogue choices instead of the voice commands couldn’t be activated until you changed some settings around inside a game launcher straight out of the late 90s. This lead to a situation in the tutorial where I sat behind a bit of cover for 15 minutes trying to figure out the controls that would make my partner shoot down the some robots while he called me a socially awkward pussy.

Another interesting feature I found in the chest of broken toys that is Binary Domain is it’s trust system. It tries really hard to dance to Mass Effect’s tune with different squad-mates that have varying skill-sets that you have to get to respect you. 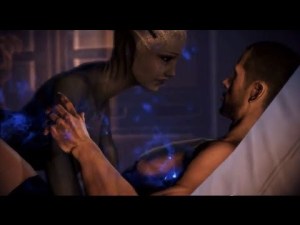 and occasionally you bang the blue alien lady. Who said video games were weird?

You can complement them to gain their trust or verbally abuse them for shits and giggles; not really as in depth as Mass Effect, but whatever. You can also select which squadmates you want to join you on different levels and which can go twiddle their thumbs off-screen. I found the experience paper thin and fake. Apparently the game agrees with me, because at one point half way through the game forces you to stick with the squad-mates you just selected for the rest of the game without any warning. And this happens right after you get introduced one of the most annoying squad-mates in the game so the odds are you’re going to be trying him out then get stuck with the fucker for the rest of the game. Despite all this it still seems like the team (at least during one point in development) tried to make something more. For instance I remember this one point where Dan makes love to one of his squad-mates, the chinese sniper, and it had an impact in the story later in the game. After finishing I wondered if the same events would have occurred if I had chosen to take the burly six-foot-six african-american heavy weapons expert instead; certainly would have made the romance scene more unexpected.

Overall, I didn’t like Binary Domain. I found it to be a waste of time that has little value as entertainment (I don’t even think it’s cut out for the Ride to Hell Retribution/ Plan 9 from Outer Space kind of entertainment). Not worth the purchase.