Y2K  has been widely compared to games from the Mother series, more specifically – Earthbound. But is Y2K seeking to be the spiritual successor to Earthbound?

In a recent interview with ACKK Studios, developers of the GBA styled indie game Two Brothers, a little bit of light was shed onto their project Y2K: A Post-Modern RPG and the team behind it; that could give us a better clue as to what the game strives to be.

Q: Who are the members who make up ACKK Studios? What are their specific
roles within the team?

Andrew Allanson is the Co-director, script writing, and composer for YIIK.

Brigid Allanson is a concept artist, character designer, and animator for the 2D portions of YIIK.

Ian Bailey is a level designer and scenario programmer for YIIK.

Q: What was your inspiration for Y2K: A Post Modern RPG?

We wanted to make an RPG that took place in modern times. There aren’t a lot of games like that. Earthbound, Persona, and maybe a few others. We thought about something that had a bit of a Pokemon vibe (the creepier parts of Red and Blue mostly.), as well as some Earthbound. Loads of Earthbound actually.

Problem with influences is you have to fight against them. You can’t just MAKE Mother 4. You need to do your own thing. So, a lot of our stuff is a reaction against wanting to just do whatever.

Q: What made you all decide on the setting of the game being in 1999?

Mostly because there was technology, but not so much that there can’t be conflict. Honestly, most modern problems can be fixed with an email or a phone call. It’s easier to understand people because they constantly post about their lives on facebook, in 2015. But in 1999, you only got to know what people wanted to share. That’s interesting to us.

Q: Are there any particular game mechanics that push the envelope in the JRPG genre that are in this game?

I think our biggest push for innovation is the Mind Dungeon. When you kill a monster in YIIK, it’s dead forever. However, you’ll still need to grind. And to do this, you’ll have to enter into the Mind Dungeon. This is a randomly generated labyrinth filled with monsters, puzzles, and story elements, that exists outside of the games major story dungeons.

Q: Who is responsible for the art in this game? What inspired them?

Brian Allanson is. His biggest inspirations were Jiri Trnka, David Oreilly, Akira Toriyama, and a lot of 2D sprites, like Lufia 2, Secret of Mana. Stuff like that.

Q: Who is composing the music for the game? Are they doing anything to push the envelope as far as musical scores for a game goes? What Genre
would you label the music being made for this game?

Andrew Allanson is the games composer. Yes, we’re pushing the envelope! Each dungeon has it’s own battle theme. As the player gets into a new encounter, instead of hearing the same track for the area, we’re having “battle playlists.” So each area has a collection of musical variations on a theme. From 10-15 different tracks per area!

As for genre, that’s a hard question. I guess it’s a blend of a few things. So, I’ll jokingly title it Symphonic Electric Folk.

Q: What are some interesting things you can tell me about the story? What kind of atmosphere will it have?

Our goal is to have a story that feels like it can go anywhere. Something that will surprise the player about where it reaches. We’re not pulling any punches with what themes we’re exploring here. Each character will have a proper arch. No character will remain the same by the end of the game. Each one will have experiences that mold them, and turn them into different people.

The atmosphere is being treated like real life. Normally, in one game, there is an overall tone. Last of Us, for example. There are happy moments, but mostly it’s one thing throughout. Real life isn’t like that. Things change. One day is happy, then the next isn’t. So, the tone in the game changes a lot based on context of the story. The game takes place throughout all of ’99, and a LOT can happen in a year. That’s exactly what we aim to show.

Q: Is there a message you’re trying to convey through the game? If so, what is it?

Great question. This one I won’t answer. I promise it’ll be worth waiting to find out!

Q: Finally, who is Alex Eggleston? Why as an audience should we become invested in him as a character?

That’s a great question. It’s funny, Alex gets a lot of hate for being a “hipster” and I love that. In fact, that’s reflected in the game itself. In 99 there really wasn’t hipsters like there is today. There was something called hipsters, but nothing like how we know them. Alex’s hipster appearance comes from modeling himself after his dad. Alex’s dad isn’t around anymore, and all he has left all his glasses, his record collection, and his flannel. Like a proper hipster, all the stuff he’s wearing is vintage. He wants to look like his dad… even if it means people on the internet call him “Hipster scum.”

Alex, at the start of the game, just graduated college. He’s not really ready to find a job. Not that he won’t want to one day, but where the game catches up to him, he’s not. Alex is a tech fan. His mom, being a programmer, was an early adopter of the internet. So, he spends a lot of his time on ONISM1999, a message board not unlike early 4chan. On this page, he finds a video of a girl. This video sets the game in motion….

The footage is simple. A young woman in business attire gets on an elevator, she presses the button for the 18th floor. The elevator doors shut. She looks around, as if talking to someone. She then presses another button, and then another… until every floor has been selected. She starts laughing, and is lifted from the floor, violently slamming into the walls.

The elevator comes to a stop, and the doors open. A bright light floods the camera, and she is pulled out of the elevator.

Alex, and a group of ONISM1999 users begin to research the video, and the adventure of YIIK begins.

So, as you can see, ACKK Studios does indeed take a lot of influence from games like Earthbound, but they seek to give the game it’s own identity. All that I know for sure is that, if you enjoyed the Mother games, or ACKK’s previous title Two Brothers, then you will surely be in for a treat when Y2K comes to a console near you.

Be sure to look for Y2K: A-Post Modern RPG on the Playstation 4, PS Vita, Wii U, and PC platforms in the future! Also check out their other game, Two Brothers, available now on the PC, Mac, Linux, Xbox 360, and Wii U platforms! If you want to read more about the game and see some screen shots, check out this preview article about the game here. 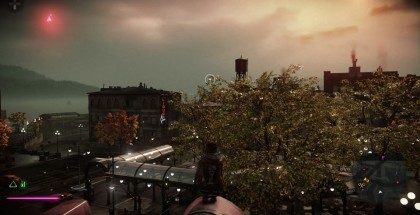