July brought Pokéfans a mound of pokémon news. Some was covered when Pokémon released a small video about one new pokémon on their official website and some was leaked by Corocoro, later confirmed by an official Japanese Pokémon trailer. All in all, it was very exciting and welcomed, giving us further insight about what our gameplay experience will be like. Without further ado, let’s take a look. 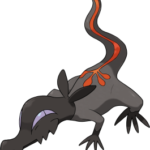 Three new pokémon were released with this wave of information. The first of these was Salandit, a pokémon that probably didn’t get the hype he deserved due to the Pokémon Go release. This little lizard is a fire/poison type and it comes with a seriously amazing ability: corrosion. Corrosion helps Salandit do what no other poison type could do before: poison other poison types. That’s right. No longer do poison type trainers need to worry about toxic immunities, because Salandit can poison anything you want it to! Depending on this little pokémon’s stats, Salandit could be something trainers may see in competitive play because of this useful perk.

Corocoro and the new Japanese trailer yielded the other two pokémon. Kiteruguma, our cute pink faced bear pokémon, and Mimicyu, the newest addition to the ghost type family.English names have not yet been released for these pokémon, but it’s likely that we will see more information soon via the official Pokémon website. In the meantime, Corocoro didn’t leave us empty handed. Types have been released for both as well as preliminary translations for their abilities. 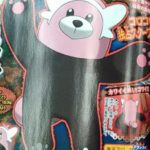 Kiteruguma from the Corocoro scans.

Kiteruguma is stated to be a normal and fighting type, and, according to current translations, can have the abilities fluffy or klutz. The description of this pokémon as translated by serebii reads as “People in Alola are scared of [it] to the point of having warning signs about it. It is really strong and can break anything in two. It likes to hug its trainers but is strong. Raising one puts your life in danger.” If this information is accurate, we may end up knowing where to catch this pokémon before actually encountering it as we will most likely find a sign warning of the danger ahead before entering the route. It may also appear later in game to put an emphasis on its power. After all, this pink faced bear wouldn’t be that scary if it was only level two.

Mimicyu, the other new pokémon. It has an interesting typing in that it is ghost and fairy type. This could mean many different things for his stats, but it’s probable that he will have a high special attack stat due to this. This pokémon’s ability has been translated as false colors but no information has surfaced about what this does yet. 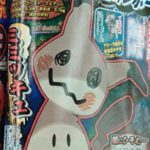 Mimicyu from the Corocoro scans.

Serebii states that “Mimicyu hates sunlight, preferring dark places. It is rumoured that the cloth covering its body is a strategy to avoid the sun. Don’t try to remove the cloth it is said that those that do become afflicted with an illness. Mimicyu’s costume is based on Pikachu merch that was popular 20 years ago. It wants to be loved by people like Pikachu is.” This explains why it looks so similar to Pikachu and it is certainly a nice touch for the twentieth anniversary, but this also may point to the reveal of this pokémon’s true form upon evolution – perhaps an evolution linked to a strong bond between pokémon and trainer. We’ll all just have to wait to find out.

We’ve already seen that we can ride Stoutland in Pokémon Sun and Moon, but the newest trailer has shown us so much more. There are bits of gameplay shown that reveal the player riding a tauros, a lapras, and a sharpedo. Some of these are very important to consider. In previous games, the trainer had to ride a rhyhorn because the terrain was impassible by humans any other way, so why would trainers have to ride pokémon in the places shown in the video, specifically in the cases of Lapras and Sharpedo? One thought is that surf won’t be an HM in this region. HMs have been demoted to TMs during certain generations before (notably flash and whirlpool), so it wouldn’t be unheard of. 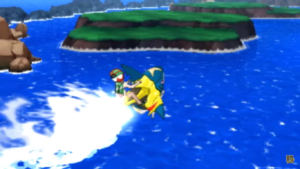 Riding a sharpedo in Sun and Moon

If you consider how Alola is literally a chain of islands, it would make sense to confine the player by taking away surf. Having that HM around gives too much free reign and presents the chance to bypass much of the story and skip to other islands or towns before the player is ready. If the player can only ride on other water pokémon, then they can be confined to certain areas by being told the services are out of order for the moment by NPCs. There is also the chance that this is just how surfing looks now, which would be pretty cool and very aesthetically pleasing.

Riding a tauros in Sun and Moon

The other two riding pokémon, Stoutland and Tauros, are also interesting. It seems as though Stoutland is going to be a slow, easy ride, probably akin to the ride the player had on Skiddo and Gogoat in previous games – a bit of a way to get used to riding pokémon. However, Tauros seems to function much like Rhyhorn in previous games. He seems to have a charging animation, meaning he could be used to break boulders and other things in the player’s path. It is probable that this will be an area that is impassible if the trainer is not riding a strong pokémon. 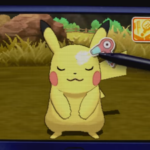 The trailer may not have shown much of Pokémon Amie, but it certainly showed enough to get fans talking. The most major change that people are gossiping about is addition of grooming. This can be seen in the addition of a button in the top right hand corner that features and brush and a comb. Also, the Pikachu being used in Pokémon Amie is shown being dried with a hair dryer. It is likely that, since grooming is being added, it will have a beneficial perk for players willing to do it and will be worth spending time on. Players can also see in the background that Pokémon Amie seems to feature the environment that the character is in instead of a set background. This is a nice touch and it will definitely make players feel more immersed in the experience as they travel thorughout the Alola region.

Something else of significance that we see in the gameplay is that the trainer poses quite a bit, seemingly triggering their pokémon’s power attacks. This is an interesting mechanic that could mean many things ranging from a secret move that pokémon don’t have to be taught to the possible beginnings of synchro evolution. Honestly, there is too little information on this to speculate on it accurately at the moment. However, it does seem as though the bracelet that the trainer wears plays a key role. It also seems as though this is something shared by not only the starters, but with Pikachu as well as the trainer in the video is seen posing before Pikachu unleashes a seemingly powerful attack.

That’s all for this update, but don’t worry pokéfans! More information is on its way soon. Corocoro has already released its theme for next month’s issue, according to serebii, so prepare yourselves for a fun filled look at what it has to say about the Southern Islands of Alola when that information is released in August. As always, have fun and play on with your pokémon!

How to get a Jolteon, Vaporeon, Flareon in Pokemon GO