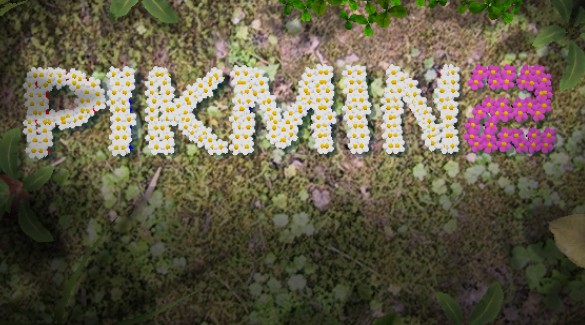 We rejoin the courageous Captain Olimar in Pikmin 2 as things have taken a horrible turn for the worse in his absence.

The freighting company is bankrupt due to an unexpected space bunny attack on a large shipment of Golden PikPik carrots. The loss has put Hocotate Freight in debt a whopping 10,100 Pokos. Luckily for Olimar, and you, he was in possession of an item that will sell quite well on Hocotate, giving him just the excuse to venture into a sequel — Pikmin 2.

Pikmin 2 is like Pikmin 1 in that it’s an RTS where you once again control armies of multicolored pikmin to help you along your way. As with the original, you meet the red pikmin shortly after you suffer a mishap upon entering the atmosphere of the planet. Louie (the lowly employee who lost the shipment to a space bunny attack) lands far away and finds some pikmin himself….and he seems to want to eat them due to their resemblance to the PikPik carrots of your homeworld. Unlike the original, however, you are not struggling for basic survival on this trip, but are instead hunting “valuable treasures” to pay of your company’s debt. These treasures can range anywhere from absolute trash such as bottle caps (only valuable to Fallout fans) to actual treasure such as gemstones or electronic devices. Also introduced in this game is the cave exploration feature, where most of the game is set and unlike the original which was all on land. Basically, you jump down a hole with your pikmin army and hope for the best in your search for loot. While in caves the time of day doesn’t change while you search multiple levels. Beware, however, because caves are dangerous and there are only 2 ways to exit: find a geyser and hop in, or face the shame of abandoning all your treasure and allowing your ship to carry you out.

Pikmin 2 includes almost all of the features of Pikmin 1 besides the constraining 30 day limit. A new feature is problem solving by using two commanders instead of one. Many times you will have to get pikmin across deadly traps by moving with Olimar or Louie, and then throwing pikmin across. This sequel also includes two new pikmin types — purple and white — which are extremely strong and poison resistant respectively. Purple pikmin can carry 10 times the amount a normal pikmin can, and when thrown can stun large enemy monsters. White pikmin have not only the ability to resist poison, but their giant red eyes also allow them to see hidden treasures buried under the ground. These two kinds of pikmin don’t have onions, but are spawned from throwing any other kind of pikmin into a candypop bud (i.e. a giant flower).

Two spray weapons are introduced that can help in dire situations, as well as new playing modes such as challenge or two player battles. The spray weapons (named after their awesomeness as Super Spicy Spray and Ultra Bitter Spray) will either invigorate your pikmin to twice times their normal attack and speed or use a kind of carbonite freeze blast.  Discovered treasure upgrades can be anything from a powerful punch ability to elemental resistances in your suit.  When inside caves you may also find Bulbmin, which are like a pikmin/bulborb cross and are immune to all of the planet’s dangers except physical damage. These bulbmin will not return to the surface with you after you beat a cave, which makes them good options to sacrifice to one of the candypop buds for a purple or white pikmin.

Pikmin 2 is an extremely fun and challenging game including many new boss-like creatures dwelling at the end of caves, new pikmin types and new game modes. It is for both the Gamecube and the Wii and sadly cannot be found for anywhere near a reasonable price. The lowest I have seen for Pikmin 2 is for the Wii version on Amazon at $30 or above (used), which isn’t too bad, but if you wanted the Gamecube version good luck finding it under $45. Also to be noted, however, the original Pikmin pricing has dropped dramatically and can be found for $15 (used of course) on the Gamecube and around $30 or above on the Wii (used).

All in all, Pikmin 2 is a great buy if you can find it reasonably priced or take it off a friend. It does have the same pathing issues that the pikmin in the original game had but otherwise nothing else bad to mention. 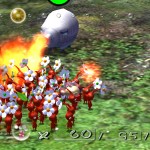