There are many times when a gamer is forced into a role – paladins, archers, mages, and the like – all roles that are chosen for us, trapping us in a life that we have little or no say over in a game. However, Fantasy Life for the 3DS remedies this gaming issue by allowing the player to choose the class (referred to as a “Life” throughout the gameplay) that they want to play as. At first glance this may not seem impressive, but the game offers players so much more than just combat through this freedom of choice.

Some of the classes (lives) that the player can choose from are artisan based Lives and harvesting based Lives, a pleasant surprise for those who are not drawn to slaying monsters day in and out. With the cutesy feel, similar aesthetics of Animal Crossing, and the thrilling action-filled and character developing plot-line of a RPG, it is hard not to love the game; although it does take a few minutes to genuinely get into the gameplay due to the tutorial given to each player when he or she begins the game (once you understand how one of each type of class works, it is completely acceptable to just skip the tutorial to save time). Given that the tutorial is rather time consuming, some of them do supply the player with interesting backstories about the Life that said tutorial is for and some provide a sense of attachment to the supporting guild members that you will not get without going through this. The storyline is pretty straight forward and certainly does not take itself too seriously although there are moments in which the player can become pretty engulfed in the plot (I personally love the story of the Dark Sultan). 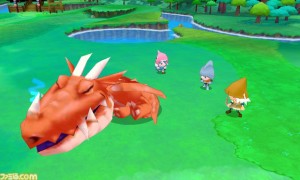 There were only a couple of true let-downs as the game went on. The first issue is pretty obvious from an early point. Many of the monsters are far too strong to be taken on when they first become accessible, even if you’re very strategic about it. That is all fine and dandy since it gives the player something to aim for, but some of the monsters, such as the notorious Napdragon (shown left) that sleeps in the first field that the player can even battle in, become no easier to battle even after gaining 20+ levels. It becomes a bit irritating to work so hard only to feel as though you have accomplished nothing of worth, and that is exactly how it feels when you get knocked out in one shot by the Napdragon.

The second issue is that Fantasy Life really exudes a Harvest Moon/Rune Factory feel in terms of how the characters operate and it seems almost like you can interact with them in the same way at first, but, much to my own personal chagrin, relationships do not seem to be something that the player can culture and let blossom in this game. The other characters are not, in fact, marry-able, and, even worse, you are hardly ever given a choice in your in your reactions. Nothing is more frustrating than having a reaction forced upon you – especially when it is forced on you by a sassy butterfly who decides that your reactions through a majority of the game should be awkward silences that translate into great joy or anger (I don’t think I ever became as angry as that butterfly wanted me to be while playing this game; I was pretty content since I could shoot fireballs at people).

Even with these flaws, the game does a pretty amazing job at entertaining players. It isn’t a game that should be taken too seriously as the content isn’t overly mature and it isn’t a game that takes intense levels of mastery, but, if you’re just looking for a way to escape real life for a bit so that you can relax and maybe shoot a couple of fireballs at a defenseless sheep or two – Fantasy Life is definitely a good game for you and I would strongly suggest playing through the game a bit yourself.

Pros: fun, not too serious, cute aesthetics, likable characters, character customization, great classes and roles Cons: No family function despite seeming to hint at it, map is hard to memorize and navigate, some monsters are too overpowered, allies can often hinder more than help, repetitive quests 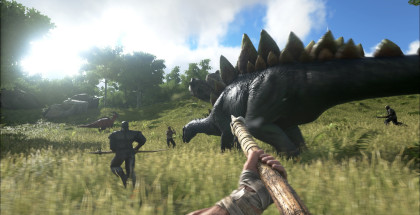