Unless you live under a rock (or on an abandoned space station), you most likely know of the long-standing legacy of Alien; and the terrifying, oval-headed, mouth-tongued creature that comes to mind when we think of the series. Alien: Isolation takes away from the original Ridley Scott horror masterpiece from the late 70’s, building on the the horror of being trapped on a space station with an indestructible Xenomorph.

A stealth-survival horror hybrid, Alien: Isolation takes place years after the Alien takeover of the Nostromo and the disappearance of Ellen Ripley and her crew. Ellen’s daughter, Amanda Ripley, is tasked to travel to a space station called the Sevastopol to retrieve the flight recorder from the Nostromo and solve the mystery of the crew’s sudden disappearance. Of course; you’re not alone. Something stalks the dark, and it’s on the hunt for whatever it can find. 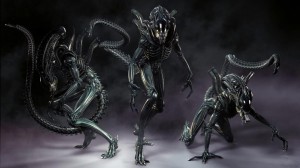 Seeing as the Xenomorph just shrugs off all conventional weaponry (weapons still have their uses in the game, just not against that brute), it’s going to take more than a twitchy trigger finger to survive. Alien: Isolation intends to bring a pure horror experience to the table, leaving the player running hopelessly through the huge span of the Sevastopol, practically defenseless, in a desperate attempt to escape the ultimate predator.

The Xenomorph will be capable of some astounding hunting skills, pursuing the player based on sound, smell, and sight. Cover your tracks, close the door behind you, and listen closely for any type of movement so you know where you can hide next. Levels are designed in non-linear fashion, allowing for a very open-ended experience as you desperately cling to every second you manage to remain unnoticed. It seems important to keep your escape strategy not repetitive, considering the Alien’s AI is capable of adjusting to the player’s strategy and making its pursuits more relentless.

After more than a few flopped Alien games over the years (*cough* Colonial Marines), this one seems very promising to finally deliver a truly heart-racing Alien experience. It’s also pleasing to see a storyline so old and well-known resurrected in a creative way. Survival Horror is a difficult genre, diluted with bad products and empty promises, and there’s no better classic example of a terrifying tale of desperation and hopelessness than Alien. Alien: Isolation will be released for Xbox 360, Xbox One, PS3, PS4, and PC on 10/07/14. DLC featuring the original cast from the 1979 classic will accompany the game with pre-order and will later be available for purchase to everyone.