Warframe is an action packed third person shooter that provides a good pick up and play experience.

Warframe is a third-person shooter that hit the PC on March 25th, 2013 in North America. The game was developed by Digital Extremes and published by Digital Extremes in conjunction with Sony Computer Entertainment. The game is made in the Evolution Engine and currently runs on Windows PC’s but will release for PS4 in the future. The game is a single-player multiplayer hybrid that is currently fully co-op with little PvP.

Warframe can best be described as a co-op shooter. Players are put into the ancient battle suits, or Warframes, of the Tenno race who have awoken from a long cryo-sleep to find themselves at war with two other races. The game has a plethora of different co-op missions: hostage rescues, defense of the point, assassinations, sabotage missions and more; however, missions tend to be extremely short, never really breaking the 20 minute mark. And despite what sounds like a great number of different game types, it really breaks down into running in, killing everyone and leaving – objectives really are defined as something thrown in on the side and don’t really hold any gravity for the player.

The combat system feels slick: gun play is tight and allows for high accuracy and clean game play, and revolves around a Warframe’s ability to be mobile. This mobility is expressed in players’ ability to leap, slide, back flip, wall run, and make many other maneuvers in combat. This definitely helps you feel like a space samurai. When running with a sword, or other melee weapon, the player feels powerful and the melee system feels complete and fully fleshed out – every attack really gives the feeling they’re striking an enemy down with their blade. An occasional issue that can come into play is the enemy AI. The AI seems a bit clunky – enemies sometimes take the oddest cover positions, almost as if they fear getting shot in the back by their allies.

One feature that attempts to add some replay value is the crafting system. Throughout missions you will collect different drops, circuits, blueprints for weapons and other things of that nature; after collecting a large number players can craft items for themselves or their Warframes. Additionally, mods – another random drop within missions – allow you to customize your Warframe with different abilities and your weapons with different boosts or stat bonuses. The game attempts to recreate some beloved MMO elements but seems to be lacking when it comes to making those elements work fluently with the game play due to the drop-in/drop-out mission style the dev’s decided on.

The game also supports clans, and gives them access to Dojo’s. These Dojo’s are invisible to all other players except for those in that particular clan. Inside, clan members can duel one another (this is the only form of PvP inside of the game). Additionally, clan members can contribute to creations in the Dojo’s foundry, a larger clan crafting system that allows for new rooms inside of the Dojo.

Overall the game is a great third-person shooter. Combat feels powerful, clean, and well developed. The progression and crafting systems, though, both seem weak and almost incomplete compared to the amazing combat system. The game play itself, however, is enough for this game to earn a solid 4 rating.

Warframe is an action packed third person shooter that provides a good pick up and play experience. 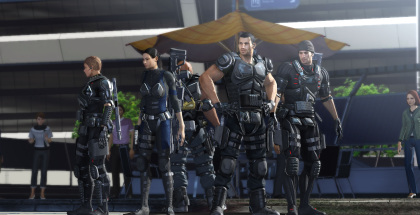