My previous article detailing important information necessary to understanding most of the blathering that goes on in this article can be found here:  http://www.slashskill.com/league-of-legends-true-beginners-guide-how-to/ 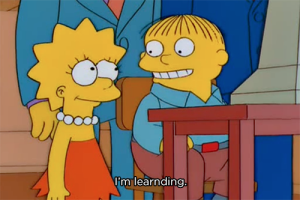 Yes you are Ralph. Good job.

This time though, we’ll be going over the strategies and nuances of the midlane! As I briefly explained in the last article, and as I’ll reiterate now, the mid lane is generally a solo lane that is best suited for mages and assassins. This is because it’s the shortest lane, so it’s easiest for the super squishy champions to get back to their turret quickly if they’re in danger. Now here is a picture of the center of the midlane, where most of the action takes place. 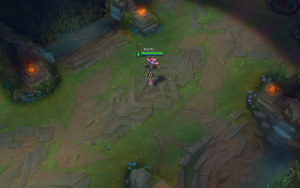 The geography of midlane is critical, as it is the most open of the lanes, with lots of areas to enter and exit the lane. There is a line of brush on either side at the entrance to the river, it’s important to buy Stealth Wards and Vision Wards throughout the game. Wards are items that give sight to your team to protect you from jungler ganks, other lanes roaming, etc. Now it’s important to place those wards in key places all over the map, but for the early game in midlane, These lines of brush are usually the best place to put wards, because that’s where the jungler most often tries to sneak into the lane to kill you. So basically, if you invest in wards, you have a few more precious seconds to react to a gank, which can mean the difference between escaping with your life, or getting curb-stomped by an angry lady with giant metal hands. 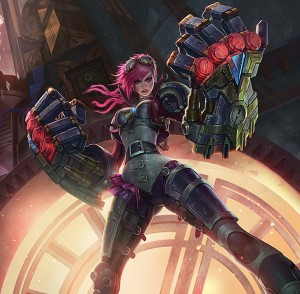 Yes, this dainty princess is a champion. Meet Vi, she’ll be jumping out of the jungle and murdering you.

Now that I got the dull-but-necessary ward talk out of the way, we can get to the fun part: 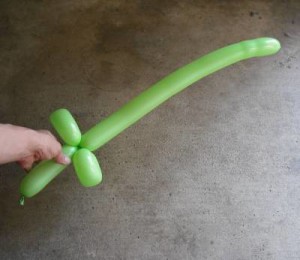 Now you’re ready to take on the world!

During the beginning of the game, after you buy your starting items and head to lane, the minions will spawn. When they get to the lane and begin to push the lane, your game truly begins. Basically as a solo-laner the beginning of the game is a two-person mexican standoff with little minions in between. You awkwardly move around trying to last-hit the minions. Last-hitting is crucial because you only get gold from minions if you deal the killing blow, so always try your best to hit them with the killing blow. This grants you CS, which stands for Creep Score. Creep score shows how many minions/monsters you have last-hit and subsequently obtained gold from. This is important to do well because the more gold you get, the faster you can get really good items. 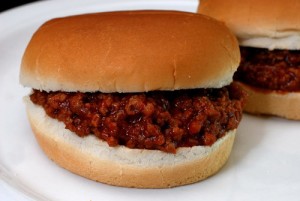 To stop you from doing this though, the enemy midlaner will try to ‘Poke‘ or ‘Harass‘ you. This basically means that they will try to use their attacks on you to get you low enough to kill you/run you out of lane so that you don’t get any CS and they can freely CS. Trading is the process of harassing back and forth with spells and abilities. Some players are very farm-focused though, and will forgo trading most of the time unless they have a prime opportunity presented to them. It all depends on the champion and your own playstyle. Another thing to be wary of is lane pushing, you really don’t want to push the lane up to the enemy turret until you know it’s safe, because it’s a long distance to hoof it in a blind panic back to your turret if you get ambushed, if you even get back to the turret without looking more like a Sloppy Joe than a champion. 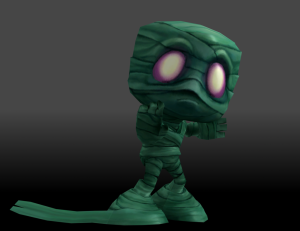 Amumu wants you to be his friend and help him when he ganks for you!

So as you’re farming, try to avoid killing the waves of minions too quickly, so they will stay in the center of the lane as long as possible so you don’t have to go into the danger zone. On the subject of ambushes though, let’s segue into jungle ganks. One important thing to always keep in mind is that the enemy jungler will be hidden most of the time, so you should always try to play safe when you don’t know where the jungler is. When YOUR Jungler comes into lane to help you by ganking your enemy laner, unless you’re super low on health, you should always try to follow them up so that it’s almost a sure-fire kill for your team. I can’t even begin to describe how common it is for the laners to ask a jungler for help and then not even participate in the kill, putting the poor jungler at even more risk. Remember kids, this is a team game, so working together is key! Also, why would you want to miss out on that kill gold right?

Now, for the scariest thing about midlaners for the opposing team is their roaming potential, since midlane is in the center of the map, you can basically get almost anywhere relatively quickly and undetected. Assassin midlaners are amazing at this. Roaming is when you walk to other lanes to help secure a kill in a 2v1 or 3v2 situation, depending on which lane you go to. This is extremely effective if the midlaner is smart about it and pulls it off. Always make sure when your enemy isn’t in their lane to let your team know so that they can play safe until they show their face again. 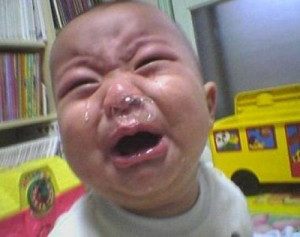 An accurate representation of the enemy’s face when they roam but can’t get a kill.

Now, as the game progresses, the laning phase will eventually end, and people will be going all over the place. As a squishy midlaner, you’ll want to spend most of your time with at least one other person, hold hands and use the buddy system, you’ll need it. Your job is to deal lots of damage and CC the high-priority targets. The people you want to prioritise killing and/or CCing are champions who can deal a lot of damage very quickly, like the opposing midlaner and ADC. You want to burst down/assassinate these high-priority targets before they do the same to you, try to stay behind your tank if you have one until it’s time to go in.

Now you may ask me, “Bazzlie, but who should I play?” Well my short answer is basically to play whoever you have the most fun with, but if you want my recommendations for the best midlane champions for beginners to play with, then let’s get to it! 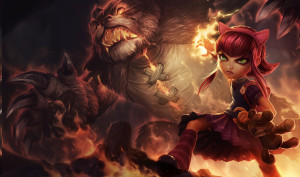 Yes, she’s a little girl. And yes, she will fry your ass.

Now Annie is a champion I hold near and dear in my heart, she was the first champion I ever bought. And I still play her sometimes. Luckily, she’s in a really good place right now. Her kit (abilities) has relatively simple mechanics in it and a lot of burst damage, and most of her spells have a lot of range, which makes her very safe.

Annie is a relatively simple champion and is cheap to buy whether with real money (Riot Points) or in-game money, (Influence Points) so she’s perfect for beginners. 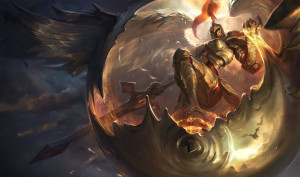 She looks like an angel, but a good Kayle player is basically the Devil.

Now Kayle is an interesting pick for a champion because she’s not played super often, but is super strong. Kayle is also a very safe champion because of her range, healing and shield. Kayle’s kit is a very different sort of kit because she is a magic-damage dealer but relies mostly on auto-attacks to deal damage.

Kayle is relatively straight-forward and a forgiving champion to play, she’s also very cheap to buy, so I highly recommend her to new midlaners. 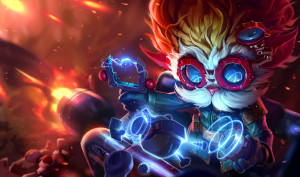 Heimy’s coming to school you on how to play midlane.

Heimerdinger. Oh dear sweet Heimerdinger. How I love you. Heimerdinger was my main champion for a very long time, and I played him and only him for a while. The reason for this is because he is an incredibly safe champion who can even push to the enemy turret with relative safety, which is something that most other champions cannot do. He also deals quite a lot of damage when played right.

Ultimately, (Get it? ULTIMATE-ly??) Heimerdinger is a very powerful and also safe and forgiving champion that can dominate a lane. He may not be as cheap as the two aforementioned champions, but he’s also not ridiculously expensive either. He’s a very good champion to play to learn as his turrets basically farm and harass for him and provide him a safe anti-jungler zone.

Well that’s that kiddies. That would be my beginner’s guide on midlaning. hopefully you made it this far, and if you do, you get a cookie. 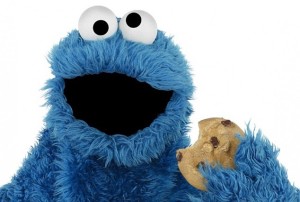 So that’ll be all for now. Thanks for reading and good luck on the rift you Silly Summoners!