A superb game about medieval Europe, not the boring parts of medieval Europe though. Its less about living the bland, hard life of a peasant and dying of horrible, incurable diseases and more about hitting people with swords. A great buy. Pros: great, addicting gameplay hours of play-time, high replay value Cons: no story, poor graphics, a little buggy (take with grain of salt, Bethesda veteran speaking)

Mount and Blade Warband is a game that not enough people care about. If it were a small child, it would come to school with unexplained bruises, wear baggy old clothes, and be very skinny and pale. Warband is a legitimately good game that doesn’t get the attention it deserves, despite that 99% of anyone who has played it agrees. If you’re one of the unlucky masses that hasn’t played Warband yet, let me explain to you why you should. If you’re part of the 1% that disagrees with me, then let me explain why you’re wrong.

Warband is developed by Turkish developer Tale Worlds and published by Paradox Interactive, of “Grand Strategy Games” like Crusader Kings, and is available on Steam, direct download from TaleWorlds.com, and on DVD — basically only Steam because who does the other two anymore (Physical copy, what’s that?). Warband is promoted as a stand-alone expansion that takes the original Mount and Blade game and adds more content and a multiplayer component.

The game’s concept is rather unique to strategy games, or any game ever in existence. You start off the game as a random dude (or dudette) plopped inside a thinly veiled 12th century Europe where six warring factions are trying to kill each other – just like when my family decides on where to go out to eat or plays Monopoly. You must gain skills by killing bandits, looters, and deserters; and build up an reputable army to claw your way up to the top of medieval high society. You can do this by joining one of the existing factions or starting your own (but you don’t want to do that right away):

Once you pick your faction, you go to any town or castle in that kingdom and ask for a job from the lord of the land. The first few jobs usually involve going from point A to point B and doing thing C. Easy enough. But for a new player, points A and B might as well be intercity Detroit the night after “free bowie knife and PCP day.” To protect yourself you need some help, and that’s where building an army comes in. Villages are prime army recruiting spots and you can also recruit people through Taverns and by knocking people unconscious in combat and capturing them, like in the PSP Metal Gear Solid games. This is not recommended because unlike the guards from MGS they don’t have chronic nearsightedness and can run away after being freed without bumping into a tree. The soldiers that you hire will start out weak but can level up, giving them access to more weapons and better armor. Keep getting guys to keep the bandits away and eventually you will have quite the sizable army. Keep doing jobs for the lords and eventually you can become a mercenary working for a kingdom and then a lord yourself. All in all, it’s a very satisfying process.

Warband’s combat is solid and enjoyable. Three main combat styles are included: fighting on the ground with swords and shields, picking people off with a bow and arrow, or horse-mounted combat. Ranged combat with bows is pretty much what you expect — shooting people with a bow and arrow. I personally think ranged combat in video games won’t be fun until the invention of the submachine gun, but that’s just me. The sword and shield method is simple but all about timing; swinging the sword from several different directions with the left mouse button or blocking attacks with the right button at just the right moment can be the difference between life or death (unconsciousness) on the battlefield. Or, you can always get on a horse and look down on those poor foot soldiers fighting on the ground like the smug, elitist bastard you are. Horseback combat is quite a bit different from ground fighting. With a horse you can get a polearm (read: big stick) and poke people with it. The faster you’re going on your horse, the more damage you do when your polearm connects with your unlucky foe, taking down even the toughest soldiers with only a few hits. The catch is that enemies can do the same and if you’re charging at another guy head-on while he is charging back at you, pray to whatever god you believe in that you hit him first or else you will be in a world of pain. Any Mount and Blade veteran knows you do not want to see the words ‘couched lance damage’ come up on the battle feed.

Like every game, Warband has flaws. The first and foremost is the lack of any story whatsoever. It’s not that the story just takes a back seat — there is literally none. You have no motivation in the game other than getting more money, power, and soldiers. Yes, besides some NPCs who will talk about their backstories, there is no overall story and no character development. All the kings and lords have the same dialogue options and the same personality. I don’t hate the developers for this; a story in this game would be impossible, considering you could be at war with one faction one week and then if you really want to go through the trouble, repair your relationship and join them by the next week. There would be no way to make a story work with all the possibilities this game has to offer. Of course, if you like freeform strategy games this might not bother you. Other flaws are rather small — the graphics look like something from the early days of the PS2, which is dismal considering that the game was released in 2010. Also the game’s world map is a little buggy but that is a mere annoyance. Warband’s problems are slight blisters that do little to mar the overall adventure.

Experiencing Mount and Blade: Warband is something rare and unique. It does have problems, but if the developers were given some TLC (read: money) then it would be more likely they could hammer out an even better experience and make something truly incredible. Warband deserves recognition and there you have it. Don’t miss out — get on your mount, grab a blade, and join the warband today! 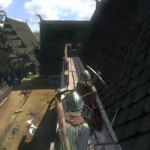 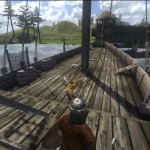 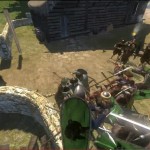 A superb game about medieval Europe, not the boring parts of medieval Europe though. Its less about living the bland, hard life of a peasant and dying of horrible, incurable diseases and more about hitting people with swords. A great buy. Pros: great, addicting gameplay hours of play-time, high replay value Cons: no story, poor graphics, a little buggy (take with grain of salt, Bethesda veteran speaking) 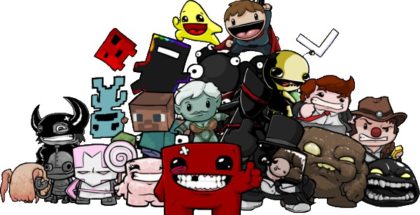