Sooner than anticipated, Pokémon fans have another update for Pokemon Sun and Moon. What is this update? Two all new pokémon! Nekkoala and Iwanko were given to players through the glory of CoroCoro scans and, personally, I couldn’t be more excited. 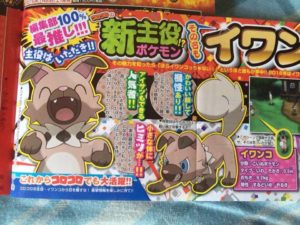 Iwanko, the mysterious puppy from the trailer.

Fans have eagerly awaited Iwanko’s announcement since their first glimpse of the, at the time, mystery pokémon in the trailer. Now that it’s here, it doesn’t disappoint. It’s adorable and is, surprisingly, a rock type. It will have the abilities Keen Eye or Vital Spirit and will be known as the “puppy pokémon.” It is also states that it will hide some kind of secret alongside the starters. This is worth noting because this could mean that the player will only be granted one Iwanko per game. Iwanko,

The new jewel that is on the player’s bracelet. Note that it looks nothing like a traditional Key Stone or Mega Stone.

while shown in the trailer, is not shown as a wild encounter, so this could mean that, like eevee in generation one, we, the players, are given this pokémon in hopes that we can train it. This mysterious connection could possibly have something to do with the new jewel around the player’s wrist (seen to the right). This may mean that Iwanko is one of only a few pokémon that we could, possibly, synchronize with. If this is so, then, perhaps, the mystery surrounding Lillie has to do with teaching the player how to synchronize much like how the previous generations had to incorporate a character to teach us the ways of mega evolution. 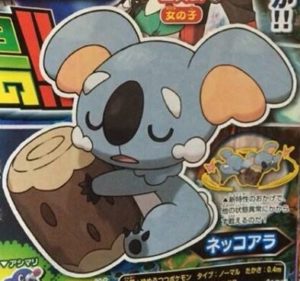 Nekkoala as depicted in CoroCoro.

Nekkoala, while not as mysterious, was also gifted to us via CoroCoro. Nekkoala is a normal type and will have the ability Definite Sleep which will prevent it from being afflicted with status conditions other than sleep. This means that Nekkolala will be completely immune to paralysis, poison, and so on. If it evolves into a defensive/HP based pokémon, this could make Nekkoala very good for competitive play. However, we’ll just have to wait and see when the stats come out! Until then, have fun prepare yourselves, trainers!

The Legend of Zelda: Breath of the Wild [News]