By tomorrow at this time, there will be a new game out to go alongside the new Nintendo 3DS.

Feb 13. 2015, the moon will fall and the land of Termina will meet with a horrific fate. Relive the world’s final 72 hours, solve rigorous puzzles, take over dungeons, defeat giant bosses, and become friends with the very people who are doomed in Termina. This remake features altered bosses and added fishing to the game.

The Legend of Zelda: Major’s Mask 3D is a remastered and enhanced version of the Nintendo classic that is not like any other of the Zelda adventure. In this tale, a masked skull kid forces Link into the world of Termina, where the moon is falling out of the sky. Luckily, Link can reverse time and relive the last 72 hours in many different ways. Each, time he will help different citizens, battle different bosses, and ultimately change the fate of the world. 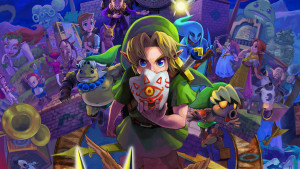 • An Ancient evil doomed Termina. Are you able to save it in 72 hours?

•The land of Termina and it’s citizens, together form one massive puzzle for Link

• Relive the final 3 days of Termina from multiple perspectives