The Yakuza series by Sega can be described in many ways, as an open-world beat-em-up, the Japanese GTA, or a revival of the Shenmue series by few. Only the most former would be accurate. The Yakuza series is one of a kind and can’t really be compared to other games. There are 10 Yakuza and Like a Dragon (the Japanese title) games in the series, all on Playstation consoles excluding the Japan exclusive Yakuza 1 & 2 HD for Wii U. The games in the franchise span from Edo period Japan to modern day; even an adaption to film based on the first game was made. Sadly, only the 4 main games and one of the spin-offs, Yakuza: Dead Souls, have been localized in the USA and Europe due to low sales and possibly problems with the western name. But thanks to fan demand, Yakuza 5 was confirmed to be translated for the west by Sega at the last E3. Thanks Sega, it only took 3 years.

I want to note that this review only includes Yakuza 1, 2, 3 and 4. These and Yakuza: Dead Souls are the only games translated here in the west.

Most of the Yakuza games have you you play as Kazuma Kiryu, An ex-yakuza man from Kamurocho trying to get his life on track after purposely taking the blame for the murder of his boss Sohei Dojima by Kiryu’s best friend, Akira Nishiki. Yakuza 4 introduces the ability to play as multiple characters including Kazuma Kiryu, but he takes a backseat for some of the other characters. The newly introduced characters are Shun Akiyama, Masayoshi Tanimura and Taiga Saejima. Each new character has their own moves and play style. For example, most of Akiyama’s attacks involve kicking while Tanimura’s play style mainly consists of defense and countering. None of them feel rushed or like they were given less thought. It all comes together very well. 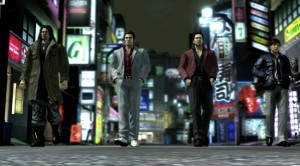 One of the most impressive feats of the series is how each game gets better. Each Yakuza game has more content and gameplay improvements than the last. The only example of the opposite happening is in the western localization of Yakuza 3. Sega didn’t give their developers enough time to translate everything the game had to offer, so they had to cut out the Hostess clubs, 22 substories and a couple of gambling minigames including Mahjong. The fans weren’t happy, but Sega seems to have learned their lesson because they didn’t cut anything out of Yakuza 4.

The story in the games are great and filled with both political and personal conflict and are written very serious throughout with a good balance of comic relief. There’s usually a twist at the end that you didn’t see coming, it can be campy at times, but it doesn’t really affect the flow of the writing or dialogue. There can be some plot holes at time i.e. the characters not knowing who Richardson is until the end of Yakuza 3. It always leads up to an amazing final battle with the antagonist – usually with your shirts off. I’m not ashamed to admit that I teared up a little at the end of the third game. Each time I started the next game in the series, I found myself excited to see the characters I’ve grown so familiar with.

The Yakuza series has an amazing amount of content. To 100% Yakuza 4 alone will easily take you anywhere between 90-120 hours. There’s a huge amount stuff packed in and at the same time it’s incredibly polished. In my almost 200 hours of gameplay, I’ve encountered maybe a single bug. That’s pretty impressive for a series with almost yearly releases.

The real bread and butter of the Yakuza series is the awesome fighting system. I never get tired of punching someone in the gut, grabbing an aluminum baseball bat, knocking them to the ground with it and hitting them in the head like a baseball. It’s satisfying to say the least. Defeating enemies, completing substories and just about everything gives you experience to spend on upgrades to your health, Heat level and even unlocks new moves for you to use against your foes. Your Heat level is what lets you use special moves against enemies such as smashing their heads into walls or swinging them into lamp posts. You build up your Heat level by fighting or using items. All of this works together to create one of the best combat experiences of any game. There are guns too, but once you get a taste of the fighting, you’ll never want to pick one up. 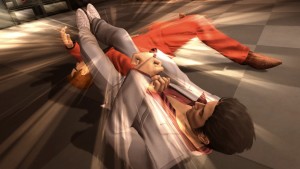 If fighting tires you out, there’s an immense selection of minigames to pick and choose from. Not only do you have golf, arcade games, various card games, gambling and several other very polished minigames, but a favorite of mine are the Hostess Clubs. I don’t think they have these outside of Japan and Southeast Asia, so if you’re not familiar, Hostess Clubs are clubs where you sit and drink with girls and just talk for a little while. It sounds like it’s boring and a little cheesy but it’s actually pretty fun and gets better later in the series when you can actually help out the clubs and the girls and unlock substories as you get to know and impress the girls. There are also hundreds of food and drink to consume and many restaurants and bars to go to. Almost if not completely all of the brands in the game are taken from real life, most are Japanese but you’ll probably notice Pepsi soda or Jack Daniels whiskey, for example. Be warned, if you weren’t already hungry when you started playing, you will be.

The polished quality and large quantity of the substories in this franchise will put the average RPG to shame. The content of substories can range from simply getting a hobo some booze to solving a murder to help the wrongfully accused. My personal favorite is “Be My Baby” from Yakuza 2, where you come across some Yakuza punks blocking the road and after beating them to a pulp, their boss is impressed by your fighting skills and invites you inside the club he rented out for some fun with the girls. Turns out it’s not what you expect, everybody is in a diaper and acting like a baby.

Finally, in the audio and visual department, Sega doesn’t cut corners. The music is action packed and will definitely help your ass-kicking feel that much more powerful. The city feels very vibrant and full of life, the neon lights and colorful nightlife of Kamurocho make you feel like you’ve been to Japan, even if you haven’t. This series has one of my favorite examples of how to do a real-life based city. Kamurocho is based on Tokyo’s Kabukichō. In later games, you can go to other parts of Japan including Okinawa.

While all of the Yakuza games I’ve played have all of the qualities listed in this review, the first Yakuza game is weak in most of those regards. The combat is stiff and lacks a lot of the style that other games in its field do well. The story is more or less completely made of surprises each chapter and only serves as the base for the characters and story of the Yakuza games. Not to mention the voice acting in this game is terrible. Sega decided to dub over the Japanese VA with famous American actors and actresses including: Mark Hamill, Michael Madsen and Eliza Dushku among a few other well known actors. This makes no sense when you consider the fact that the game takes place in Japan. However, all of these problems are solved in the second game. The fighting feels more refined and fluid, no more English VA, and the story is more fleshed out and mature.

The Yakuza series is one of the most consistently awesome franchises I’ve played. I don’t quite understand why this series isn’t as popular as it should be here in the west, it has everything everyone should love in a game; excellent fighting, an engaging story and an amazing amount of content. I would say that the only things that other open-world games do better is a better sandbox experience and better gun play. Even without these things, the fighting system alone would make games like Sleeping Dogs and the Batman Arkham games shake in their boots.

If you end up playing the games, Yakuza 5 is set to be released in the US and Europe some time this year(2015). If enough people support it, Sega is sure to localize future titles including Yakuza 0, a prequel to the first game. So if you enjoy them, support them!

Even with a weak first game, it's very much worth playing all of the games. An excellent fighting system, huge amount of content and a thick coat of polish are all reason enough to go out and play them all.

Brawlhalla: An interview with Blue Mammoth Games... May 21, 2015 | James Blankenship 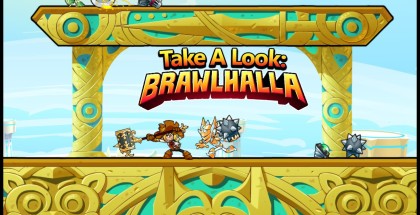