Fluid action, nice graphics, and low commitment, but might deter the hardcore crowd.

In the last few years the MOBA genre has really taken off. So much, that we are now swimming in a sort of sea of MOBAs. Tome is another new comer to the scene and takes another shot at reeling in some of the more casual players. Like any moba they advertise a large set of features that “set them apart” from the others and for the most part we’ve seen a lot it before.

The thing that stands out the most is the advertised common match time of around 10-20 minutes which is actually a pretty nice change of pace. Veterans of the house hold name MOBAs have likely all felt the sting of a 60+ minute game that seem to never end. Tome has thrown away the lengthy farming periods and set their focus on quick action packed arena matches. 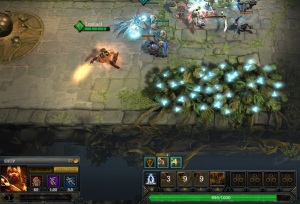 Mana is for sissies anyways

Combat feels quick and reasonably fluid, rewarding fast chaining of abilities. The available characters, or “guardians” as the game refers to them, have relatively short, sweet, and to the point abilities which require no mana to use, so the only resources you will have to manage are your health and your cool downs.

Tome insures you spend as much time as possible duking it out by getting rid of every possible thing to distract your attention. You start at level 1 with all of your primary abilities except your ultimate which you gain at level 6, all of which upgrade automatically. You don’t need to return back to your base unless you die and out of combat regeneration is VERY high, so if you are badly injured in a fight you can back down for around 10-15 seconds and be back to full health. In the mean time you can peruse the shop for items which will be delivered within a very short channeling period, no courier or recall required, though the option to recall is available for juke escapes still.

Overall Tome does a great job at reaching its outlined destination. After playing for a while my matches tended to last around the 15 minute mark every time. The matches were full of constant action and I had a pretty reasonable amount of fun. The graphics are actually pretty refreshing step forward against Tome’s competition. While holding some common themes, overall the textures are nice and fairly detailed and the art overall is pretty cool.
One of the biggest surprises found in Tome that left a big grin on my face is the announcer in game voiced by the legendary Bruce Campbell. Yes. I mean THAT Bruce Campbell. At any point in the game or in the lobby even if you need to be notified of something whether it be your match being 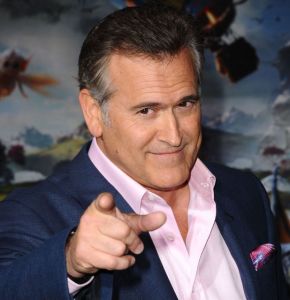 Don’t forget about that tower brother!

ready or your tower being attacked in game, you will be warned by Bruce Campbell. It was actually pretty distracting for me as a big fan of Evil Dead and Burn Notice, but it’s definitely for the better.
Besides all the good, Tome suffers from the same painful system that League of Legends and a pretty fair amount of their followers share – Character Purchasing. Unfortunately, to own whatever guardian you want to play, you have to wait for them to become a part of the free rotation, save up the in game currency to purchase them which seems to take a reasonable amount of time or to purchase Tome’s real money currency called “Platinum”. As the game stands all the guardians available cost 900 platinum which is pretty close to about 7$ a character which… feels a little steep, but is not dissimilar to the cost of characters in other mobas. 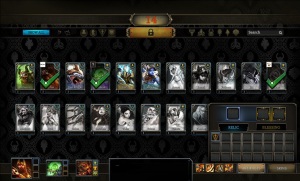 The Guardian Selection is already very limited especially when you only have a set rotation without purchasing.

The items available to purchase are pretty limited with only 3 attributes to purchase for which are Might (Basically Attack Power and Ability Power mixed into one attribute that improves your overall damage), Attack Speed, and Health. There are some added features to some of the upgraded items that bring a little more depth to them, but for the most part there is not a whole lot of options. Of course, this does keep Tome more casual and gives you more time to focus on brawling.

Besides that, the only other issue Tome will encounter is well….itself. I can see Tome doing very well with the casual community, but a huge chunk of MOBA players are the hard core backbone forged in the fires of the original Warcraft III Dota that live and breathe the super heavy competitive play and grand tournaments that won’t really be able to be present in Tome which will certainly hurt its longevity.
Overall, Tome is a pretty solid addition to the moba genre. The learning curve isn’t too high and seems to be pretty easy to pick up and start playing. Even as a veteran dota player I had some good fun playing it, and best of all IT’S FREE ON STEAM. So, even if you are a little skeptical about Tome, there is no reason to not go give it a shot.

Anyways the TL;DR
Pros:
-Very low commitment with 10-20 minute matches
-Fast, fluid, and satisfying combat
-No resources/ Out of combat regen lets you stay in lane/Ability to buy items in lane
-Better graphics then a lot of the competition
-Free to play on steam
-BRUCE CAMPBELL!

Cons:
-You need to purchase characters or use the free rotation
-Very minimal item choices
-Might push away Hard core players.

Fluid action, nice graphics, and low commitment, but might deter the hardcore crowd.