Nostalgia is a powerful force to be reckoned with. Good luck not feeling its strangely satisfying bite when you plug in that Atari and take a trip back to the good ol’ days, or turn on a channel on Saturday morning that shows old cartoons from your childhood. Reliving moments that were once precious to us is a very fulfilling experience that practically forces you to crack AT LEAST a half-smile. My childhood was primarily ruled by a very particular group of time-consuming, adorable little tyrants… Pokémon.

They are the all-powerful master race that occupies continent upon continent in their own world. As an avid follower of the series, I’ve experienced every continent in its entirety, most of them two or three times over. I’ve seen the best of the series remade (Gold/Silver), and stuck it out and trumped some of the installments that were hardly worth the namesake (Black/White 2).

Now, at long last, the clouds are parting and revealing the big mother of all remakes. That’s right, folks, children and adults alike, here comes Omega Ruby and Alpha Sapphire, in all of its beautiful, nostalgic glory. Of course, putting together the basic ideas of common sense and chronological order, we knew this one was coming eventually. Hoenn has been long overdue for another visit, and I, personally, am ready to tear into it like a rabid wolverine in a rabbit breeding pen.

The Hoenn region’s games have always had a particular mysticism about them, one that somehow set them apart from the other games. After all, they did bring many revolutionary classic gameplay mechanisms, such as double battles, natures and abilities, which really helped to add a competitive edge to the series. The remakes of the games will bring us back to the fabled continent with the aforementioned mechanisms and much, much, much more.

So let’s start with the mechanic that’s receiving quite a bit of an update . Mega Evolutions are just the ‘in’ thing these days. Who doesn’t want to take their little monsters to a whole new level? There’s a lot of new evolutions for our ever-familiar Pokéfriends, including old favorites like Glalie, Sableye, and Sharpedo, the three classic Ruby/Sapphire starters, and even the old-school legendaries like Latios and Latias. There’s also ‘primal’ evolutions, in which some Pokémon ‘devolve’ back into their prehistoric forms. There’s not a lot of information on this as of yet, but Groudon and Kyogre are both capable of achieving this form. Of course, it’s pretty exciting to see such familiar personas changing things up after all this time of the same (albeit still not stale) faces.

Ever wanted to see what things look like in Hoenn from far above? You know, the Team Rocket perspective? With a new game mechanic known as ‘Soaring’, you can now get a bird’s eye view of Hoenn. Latios or Latias will join the player as a central point to the story line, and after you find the ‘infinity flute’ (further details unknown), you will be able to freely take to the skies. And it’s not just flying around in circles, either. You can confront flocks of wild pokemon floating around the skies, as well as enjoy some other events such as hidden areas accessible only by soaring and watching the changing weather and day/night cycle.

Remember the Pokénav? Random trainers calling you off the hook, offering battles and trades and whatnot? Imagine the applications in today’s multiplayer environment. The Pokénav Plus will be used as a hub for the player’s Pokéhunting. It is split into four separate programs, detailed below:

-DexNav, used to see information on pokemon found in the wild, of course. However, it adds new functionality to assist with finding, identifying, and capturing pokemon. See a tail sticking out of the tall grass? Identify the Pokémon with DexNav, and sneak up on it with the new analog-based sneak-and-confront system. It is capable of much more than what is mentioned, and will surely play a central role in filling up your Pokédex.

-BuzzNav is a pretty neat little feature, allowing the player to view television programs that tell the player more about the ecology, behavior, and location of wild Pokémon. Also, the more people you streetpass, the more programs you will be able to view.

-AreaNav is basically a map. Not too much to it. View any of Hoenn’s towns, routes, or secret bases (By the way, can’t wait to make a few bases!) and see where you planted your berry bushes. Oh, yeah, and the trainer’s eye feature is back from classic Ruby/Sapphire, allowing you to see trainer location and whether or not they’re ready to go another round.

-And then, there’s PlayNav, which integrates the bottom-screen features from Pokémon X and Y into OR/AS. Super Training, Pokémon-Amie, and the global PSS are all condensed into PlayNav. Battle your friends, get closer with your Pokémon, and EV train an elite team with this handy all-inclusive PokeNav function. 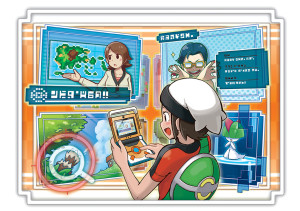 Omega Ruby and Alpha Sapphire hold a lot of features that will both please veteran trainers that are revisiting Hoenn after many years, and the younger crowd who has yet to experience its glory. There’s no denying that this will be a pleasant experience. With all that is so far announced and detailed, which surely isn’t even all of the new features, this game is obviously prepared to deliver. It seems unlikely that anything will go wrong with this re-iteration of a wonderful gaming experience, and it’s very exciting to finally know they’re right around the corner. The competitive Pokémon scene is always ready for action… better get to it, trainers.

Keep those eyes open for exclusives, GameStop and Nintendo both love to throw their customers a little something special. The two games are slated for release on November 21st, for the Nintendo 3DS. This, of course, means it will work on the 2DS, as well. Both games will also be available for simultaneous purchase with an announced dual package.

[How to] Make gold in World of Warcraft