ArenaNet announced recently, their first (and desperately needed) expansion to Guild Wars 2. This expansion has been named Heart of Thorns.

Heart of Thorns will take place deep within the Maguuma Jungle, and will build upon the current Living Story that’s taking place right now. Heart of Thorns will focus mainly on the Pact’s battle against the Elder Dragon Mordremoth, and all of the events leading up to it, aside from the living story content. So go catch up if you haven’t already!

Chock full of brand new bosses for you to wreck, new events and storylines to experience, and a new open world for your guild to conquer, Heart of Thorns will bring a welcome challenge to Guild Wars‘ playerbase. But, you’re here for the cool, new stuff. So, let’s get to it. 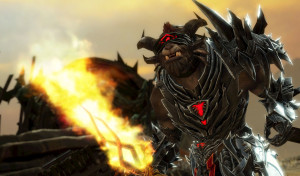 Each profession (read as: Class) will be able to unlock access to a previously unavailable weapon, and gain an entirely new set of skills with it. Which gets me hyped for sword-wielding Necromancers. On top of a new weapon, we’ll also be receiving new traits and new mechanics that go along with our professions so that we can shape them into something entirely different (See ya later zerker meta). This will give the game a much needed breath of fresh air to the current professions and character building community. After dealing with pretty much the same thing since I started playing in 2012, I’m excited about getting something new to tinker with.

Man, I’ve spilled enough blood with my brothers in Trailer Park Boys[TPB] that I know we deserve our own little spot in Tyria, where we can hang our trophies and drink our Norn grog until we run out of gold. ArenaNet is giving us just that! Guild Halls have been announced and will probably operate just like the current player housing. The hall will be located in Magumma, and will need to be unlocked by your guild in order to be accessed. No other specifics have been given yet, but we can all speculate and dream for the fun of it right?

Stronghold is the new Game Mode coming to the PvP scene for Guild Wars 2, with the release of Heart of Thorns. I’m not that big of a PvP buff in Guild Wars  2, but even this new game mode has me itchin’ to wreck house. After reading on how the game will go down, it seems as if it will play out similarly to how Alterac Valley did in World of Warcraft.

Here’s a bit of info directly from the Guild Wars 2 site about Stronghold,

Gather supply to hire soldiers. Battle for control of heroes. Man the trebuchet to defend your stronghold, and storm the enemy gates to defeat the guild lord! Use our new guild team feature to team up and battle to the top of the leaderboards. Stronghold offers an entirely new way to play competitive PvP in Guild Wars 2!

But that’s not all for the PvP content. We still have World V. World to talk about.

With the expansion and a new PvP gametype, it’s only fitting that we get an ENTIRELY new borderland for WvW combat. Not much has been spoiled about it yet, but from the tidbit of info from their site, it seems like we’ll have a “blast” in the high altitudes this map has to offer. 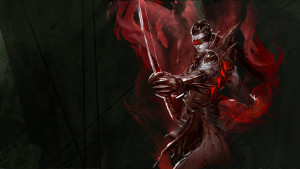 Que the fangirl screams. Heart of Thorns has no doubt been full of ‘Hype Train’ material so far, but this has to be the plat de résistance! The Revenant now steps onto the field of battle in this Expansion pack, and it’s about damned time! We’ve had three cloth professions, three leather wearing professions, and only two Plate wearing classes to mess around with so far. The guys in my guild can probably fill a book with all of my rants about Guild Wars 2 needing a third Plate wearing profession, and I’ll laugh in their face about it being a Death Knight-esque profession as well. Lets take a look at the info from the webpage;

Channel legendary powers to slaughter foes and unleash chaos on the battlefield with our brand new profession: the revenant. Enter the field of battle heavily armored and equipped with the otherworldly powers of the Mists.

Okay, so maybe it isn’t as Death Knight as I think; but it’s red and looks angrier than my Guardian. It seems Rytlock has gotten around to figuring out how the Revenant is supposed to work since his disappearance in the living story though. So, I assume he’ll be able to give us some more definitive answers. Regardless, it still looks pretty metal.

That’s all that I can blow about the new expansion for the moment, but if anything else comes up on Heart of Thorns you can count on Slashskill to have it covered! 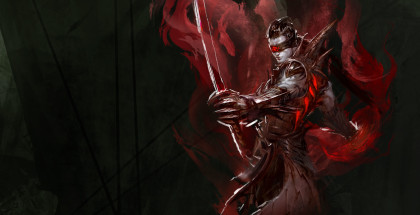