Games like Mike Tyson's Punch Out!! are the reason that I started playing games. At the end of the day there is little this game does wrong. The combat is fantastic, the roster of characters is unique, and the music keeps me coming back for more! For those looking for an easier game, look elsewhere; Mike Tyson's Punch Out!! Will lay you out on the mat time and time again.

Mike Tyson’s Punch Out!!, developed by Nintendo R&D3 for the Nintendo Entertainment System, and was released in North America in October 1987, is the subject of this week’s Throwback Thursday. With great gameplay, an extensive array of characters, and one heck of a difficulty curve, Punch Out!! has a shot at the title belt. Punch Out!! runs about 5$ on the Virtual Console store, and around 15-30$ on Ebay.com for you collectors out there.

Mike Tyson’s Punch Out!! is a standard among collectors and a favorite of many gamers both young and old, for good reason!

In Punch Out!! players step into the ring as Little Mac, our underdog hero from Brooklyn, looking to climb through the ranks of several boxing divisions in order to take home the World Championship Belt. Under the guidance of Doc Louis, Mac is pit against quite the motley crew of challengers. From pretty-boy Frenchman, Glass Joe; to Soda Popinski, the Russian powerhouse, You and Mac definitely have your work cut out for you.

The game plays like a reflex tester on steroids, but that doesn’t stop you from immersing yourself in this glorious title from Nintendo. Bouts are three rounds long with each round lasting three minutes. Although, most fights can be completed within the first two minutes resulting in a K.O. from Mac’s Star Punch. Otherwise, you can usually finish a bout in the first round resulting in a T.K.O. (by knocking them down three times). The fights increase in difficulty as the game progresses, and by the time you meet Bald Bull for the second time you’re sweating as if you’re right in the ring with Little Mac. If the difficulty is starting to get to you and you manage to get back to your corner after the first round, Doc Louis will have a few pointers for you. Oftentimes he will just spout amusing anecdotes or give you a pep-talk, but sometimes he’ll let you in on your opponent’s “tell”. These “tells” can either be very apparent like Bald Bull hopping around like an idiot, or as subtle as Piston Honda winking at you before he smears your corpse across the mat. All opponents also follow a particular pattern, much like how the ghosts in the original arcade Pac-Man did. If you manage to sit down and learn these patterns the game becomes quite easy! There are even videos of people playing the game blindfolded! Even with the patterns though, the fights still feel desperate. If you lose focus and Mike throws you across the screen it’ll leave you scrambling to get back into the fight and you end up losing your place in the pattern, turning the bout into a battle for survival against an unpredictable foe.

Nintendo manages to breathe a bit of goofy charm into the ring despite the flurry of fists. With characters like Don Flamenco who dances across the ring during his fight, King Hippo, whose bark is definitely worse than his bite, and Mario taking a break from fixing pipes and rescuing Princesses to referee a few rounds, Punch Out!! manages to give that familiar Nintendo vibe. The music gets you hyped up for a fight, gives a sense of relief after you knock an opponent down, and keeps attention right down to the Game Over screen.

With the dust settled on the ring, and Mike Tyson recovering from the beating of his life you finally get to take it all in. The music rings in your ears, the cheers of the crowd, the goliaths you and Little Mac have toppled. It all culminates together into an amazing game experience. Sure we got our face beat, but life’s a journey, and it was a long road to the championship title. “Good Night Mike!  *Ding Ding*” 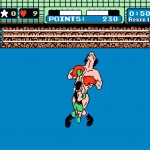 Games like Mike Tyson's Punch Out!! are the reason that I started playing games. At the end of the day there is little this game does wrong. The combat is fantastic, the roster of characters is unique, and the music keeps me coming back for more! For those looking for an easier game, look elsewhere; Mike Tyson's Punch Out!! Will lay you out on the mat time and time again.