Losing is fun and I have been doing it for years. I wanted to do this article right, so I went back to where it all started for me five or six years ago, Bay12. I actually got chills as I downloaded the newest version, 0.40.24, of the game. As I waited patiently for it to download onto my little 2 GB flash drive – the game only takes 23MB and is completely free to download and play – I scanned through the updates that have occurred since I played this game a few months back. There were some … interesting changes. Apparently, dancing is being included for the game. But none of this makes sense to you yet so lets get on with part one of this review.

Dwarf Fortress is programmed by Tarn Adams and designed by Tarn and Zach Adams. They are the ones behind this impossible game that with each update becomes easier but so much harder. This game’s unfathomable possibilities are truly astounding to me. I know nothing of technology programming of games but the capability, insane detail, immense scope and immersion makes me feel like Franklin Benjamin Richards every time I create a new world to play and explore.

This part of the review is going to focus on fortress mode of the game. This is where you start with 7 dwarves of various abilities. You are able to select your starting location and materials. The locations can range from peaceful areas to the most vile and evil of the map. As the game progresses migrants arrive to increase your numbers, traders bring in items, and armies attack. As even more time passes your humble beginnings change from a small hole in a mountain to a burgeoning complex filled with workshops, rooms, training rooms, death chambers and massive builds that seem beyond imagination.

The only thing that can take away from the phenomenal capabilities of the game is the player’s impatience to overcome one of the largest learning curves in gaming history. The graphics are in ASCII graphics that many find hard to get over. When I first started playing I learned it all one by one until now I can look at this picture and tell you everything in it. This is the start of the game in Fortress Mode that I created while writing this article. 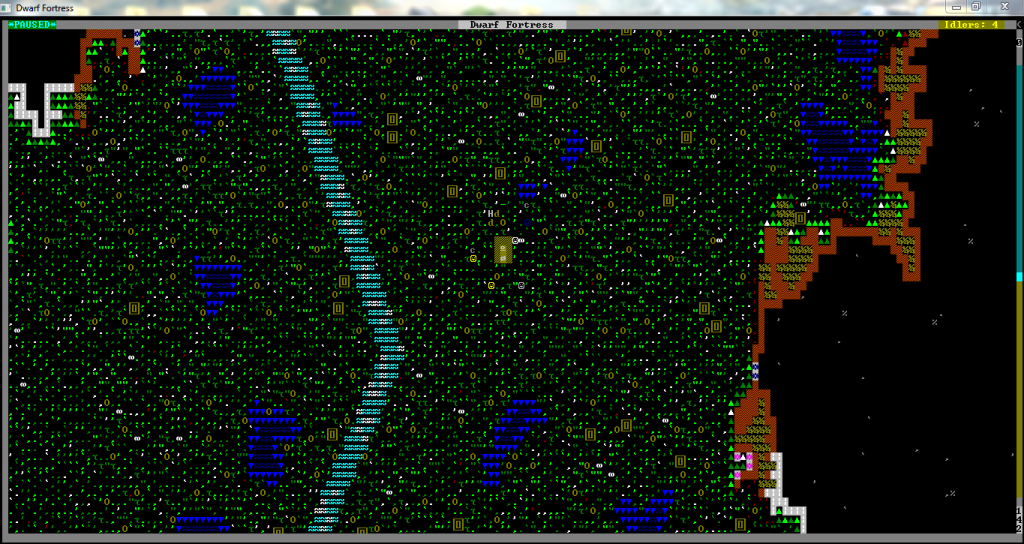 Just like in the Matrix I don’t see brown circles and semi colons anymore; I see tree trucks, vast plains and a rushing river. Players have attempted to deal with this through mod packs for the game. Another obstacle is the simple fact of where to start in the game. The army, the tree cutting, plant gathering, farming, fishing.

You are able to play in fortress mode and create a massive underground dwarven hub and eventually delve too deep into the darkness. Or deal with a Necromancer who converts your entire base with an undead army, or a vampire who will hide amongst your dwarves drinking the blood of your dwarves as they slip into their final dream, or a goblin army coming to seek your amazing riches, maybe some angry elves because you attacked their caravan too many times or cut down too many trees, bloody elves. And this can pretty much happen within the first hour of game play.

The greater your fortress becomes the more renowned you become and given time, your mountain home can become a kingdom itself and will be known throughout the world. Inevitably though you will lose this game and there are many ways for this to happen, all more fun than the last.

The least fun form of death is death by FPS, Frames Per Second. Eventually you will get too many dwarves and creatures in your game and your FPS will drop to such a minimal level that the saved game can no longer be played. If your death is more premature, then an army or other circumstances like starvation can wipe you out and cause your fortress to be abandoned. This is when the game starts over again through the creation of a new fortress somewhere in the world or you can try to reclaim your old fortress from the disasters of the past and bring new life to it once more with the hammers of a new clan.

The next step is when you start a new map or move to the first person version of the game and strike the earth in person. Given enough time, adventure and travel, you may find your old fortress and explore the familiar engraved and probably blood coated halls of your past. Adventuring through the lands of your world in person, gathering a following of fellow heroes to become famous and world renowned, maybe one day in a fortress yet to be built – you will find engravings of yourself on the walls on another fortress. But that path will have to wait for the next part of the review. So until next time, “Strike the Earth!” and see what there is to see and join a world more detailed and deep than any game on the market to date.

Final Fantasy VII – Disappointment of the Present or a Hope for a Crisper Future?