Arguably the best bread based game ever made. I've never been more angry from one game in my entire life.

On Bossa Studio’s website, they have a description for I Am Bread that says “The beautiful story of one slice of bread’s epic and emotional journey as it embarks upon a quest to become toasted”.

After playing I Am Bread, I think a more appropriate description for this game would be: “The rage inducing story of one company’s epic trolling as they embark upon a quest to ask their fans: You Mad Bro?”

I Am Bread is a…… Bread simulator? I don’t know exactly what to call it. An Action/Adventure/Bread Platformer? Whatever.

One giant leap for bread-kind

You play as a piece of bread that has reached a new stage of enlightenment and pulls itself off the rest of the loaf in order to become toasted at his own will.

Odd that even when given free will, the bread still desires nothing else but to be delicious, and you’ll soon find out how difficult a task that is. The game is fairly simple…..And when I say that – I don’t mean it’s easy. I mean it’s easy to grasp. The movement is pretty difficult at first, and as you master it, it’s still really difficult, but it’s about as difficult as I would imagine it to be as a piece of bread trying to trek across the kitchen. In actuality once you get the hang of it, the controls aren’t too bad and are pretty fun when you start doing some crazy maneuvers, but will never prepare you for the ultimate task. Actually becoming toasted. Travelling far across the kitchen will become quick and buttery like you one day hope to be and while the physics are baffling, they will provide you with the small amount of laughs that you will have until you reach the toaster for the first time. You need to be careful in this journey because there are many dangers to the common bread. Like the floor… or ants… or something. 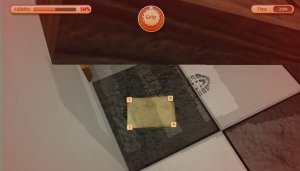 If you come in to contact with anything that could reduce your edibility it will lower your bar at the top. So falling on the floor will quickly… well not kill you, but definitely make you less tasty.

Ants and muddy footprints are your adversary and even the common household fork will try to make you taste bad.

I have so far only been able to become toasted twice. I decided to go a second time in the first stage to get a better score because my first one was horrible and depressing, but by the time I had become toasted again I was ready to give up technology and live the rest of my live out in the wilderness away from all the stress and bread in this world.

What can I say about I Am Bread? Is it bad?

I guess not. I really liked Dark Souls even though it made me really mad, but I guess I shouldn’t be comparing a game where you play as a piece of bread to Dark Souls.

Not the first silly comparison to Dark Souls to be fair.

The game plays well, and for early access it seems relatively bug free.

The Truth is Out There

The only issues I find are ones like where I get stuck between the toaster and the wall from it falling over on me, and although my bread strength is enough to throw objects much heavier than me across the room, it immediately is cancelled when the toaster is over top of me.

The thing about that is, I’m not sure if that’s actually an issue,or if that’s intentionally like that to bring you over the edge. 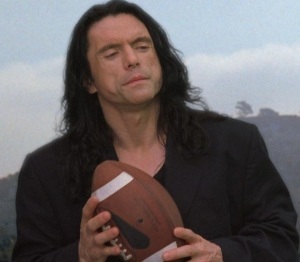 My prediction is, that by the time this game is officially released we will start seeing a death count from this game. Whether it be suicides – or savage rage induced murders, we might need to put a stop to this game. You will get locked into playing over and over somehow hating every moment of it and screaming at yourself endlessly while you hit the restart button again, and again, and again. 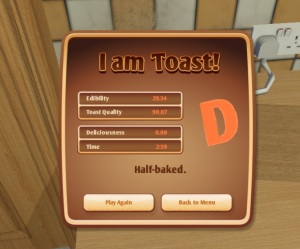 Even when all you get is negative feedback

I guess there is some allure to becoming toasted. Or maybe it’s that you can’t help but root for the little guy trying to make his wildest dreams come true no matter how mundane. If you’re like me you will spend a lot of time playing this and be left angry and confused, and probably a little hungry.

Arguably the best bread based game ever made. I've never been more angry from one game in my entire life.