Mobile gaming is huge. iPhones, Android, tablets – everything seems to be moving to gaming on the go. There’s all the handheld gaming consoles as well; the multiple types of DS’s, the PS Vita, and these systems offer great gaming on-the-go. Now let us combine super powerful new-age tech, with something a bit more grey and 90’s like: Hyperkin’s Smart Boy!

For those of you reading this that did not have a chance to play with Game Boys (this makes me feel incredibly old) this was the first good portable console. Tetris was huge on this little guy! We definitely cannot forget the debut of Pokémon back in 1996 for the Game Boy either! I like to think of this system as the grand pappy of all portable gaming. Sure, there were other consoles made such as the Atari Lynx and the Sega Game Gear, but I like to act like those never existed. 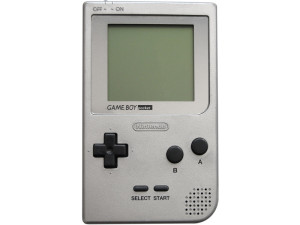 The nostalgia… it’s all coming back…

So what’s going on with Smart Boy? Well, the idea is pretty simple. Your phone slides into an attachment (the Smart Boy) which looks like the original Game Boy from 1989. All the buttons will be functional, and it will have only the standard buttons (A, B, SELECT, START, and a D-pad). The attachment will also have a battery which charges through the phone. The development process might change some things, but the games will display on the phones screen, and there will be a cheat database and save states. 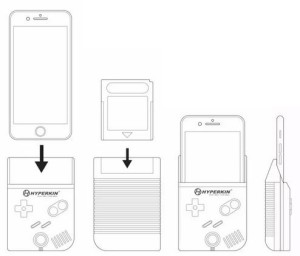 Basic diagram of how the Smart Boy will connect with smart phones and cartridges.

So what’s the BEST part about this? YOU CAN PLAY YOUR OLD GAME BOY GAMES ON IT. This isn’t just something that works with a console emulator; this is more-or-less a Game Boy without AA batteries! Go break out the old dusty cartridges and have a ball! Always interested in playing the oldie goldies? This is the perfect chance for you to test some new technology with some classic gaming.

Technology has advanced so far from the early 90s, yet a lot of people don’t give credit to the technologies that started different forms of gaming. I love products like this because it shows what our technology can do today, and also pay homage to the old tech that started our craze with gaming. There’s a considerable amount of people that may not give the older games a chance, but I think products like this can change that mindset. You can bet your entire college fund that I’m getting this as soon as it gets out (even if it costs my own). I miss playing my old Pokémon and Mario games on road trips. Now get off my lawn! Snow… twenty feet… walk 15 miles… zzzzzzzzzzzzzzz.