This game is a nice little interactive story its only problems are that it's easily forgettable, it's only two hours long, and its overpriced

There is a large argument going on amongst the gaming community (I’m hesitant to use the word ‘debate’ in this sentence due to the implication that most participants go about debates with a slight degree of civility). The argument stems from the question “what constitutes a video game?”. There are some people who support the idea that a game has to have some sort of challenge; enemies to kill, hoops to jump through, stuff like that. Some people view games as a new medium of expression and are willing to look past problems with gameplay if a good narrative is involved. Personally I disagree with both sides partly because one side consists of a bunch of Mountain Dew chugging, Dubstep loving, Halo fans and the other is full of pretentious hipsters, each of whom have a log stuck so far up their ass that they are in danger of choking and partly because I think the term ‘video game’ is entirely broken. Allow me to elaborate: When you walk into Gamestop or log onto Steam (places that define themselves primarily as video game vendors) do you have any idea how varied one product can be from another? Things we call video games are so different from each other; Spec Ops the Line is an interactive war movie, Civilization 5 is a board game on steroids, Dead or Alive: Extreme Beach Volleyball is a masturbation aid, Day Z is a zombie apocalypse simulator, Bioshock is an introductory lesson on objectivism, League of Legends and DOTA are virtual blood sports, Counter Strike and Chivalry: Medieval Warfare are fun virtual bloodsports, and World of Warcraft is  digitized heroin. The point I’m trying to make is that ‘video game’ is a label that extends so far that it’s kind of meaningless. Video games are so different from each other that they should be considered different things entirely.

The reason I brought this up is because the game I’m writing about (the game who’s review you clicked on and expected to read instead of the ramblings of a  person on the internet ; the game which I should probably start actually reviewing right now), Gone Home ,a 2013 game by the Fullbright Company (available through Steam and direct download for $19.99), is at the center of this discussion. Gone Home is an experiment in interactive storytelling and game design. It is a game that attempts an engaging story alone, without having any puzzles or combat. Before going any further I have to admit that it succeeds at this very well.

Normally at this point I would go on to talk about the gameplay and story, but I don’t want to spoil anything, the story is better when the player walks in without knowing anything the developers didn’t already tell you. I’m just going to tell you whether or not you should buy it before explaining my opinions in depth (read: I’m going to spoil everything). Okay now that, that’s out of the way: If you think that a game can be engaging through its story alone then I would recommend buying it on sale ($5 to $7.50 is a good price).  Anyone who was expecting any sort of challenging gameplay or the chance to get their money’s worth in total playtime will be disappointed. Gone Home is only two hours long. That’s the bare bones review, now I’m going to go more in depth.

Gone home is set in the 1990s and follows the story of the Greenbriar family. The player controls Katie Greenbriar (you play an empty vessel ,much like Jack from Bioshock, but without the plasmids and ugly sweater ), who arrives at her family’s new home after a spending a year traveling in Europe to find them missing. The player has to piece together what happened by moving through the house, picking things up, and looking at them. This is not as boring as it sounds, surprisingly. Frequently the player finds particular objects that trigger a diary page to be read by Sam, Katie’s younger sister whom the main story centers around. The player continues to advance through the house, looking at objects, and listening to Sam until the house is completely searched and Sam’s story is complete.

As I mentioned, the gameplay is nothing special. The only thing Gone Home’s gameplay does well (and the only thing that it really needs to do well) is help tell the story. The FullBright Company is partly composed of veterans of the Bioshock series and their experience with this sort of story telling really shows. Before I played this game I thought an interactive story would be impossible without forcing the player down a completely linear corridor, but Gone Home pulls it off. The game manages to tell the story through it’s environment. In every room of the house the player has to pick up objects and closely inspect them to flesh out the characters and the world they live in. While you progress through the house the story progresses with you as you constantly move forward and trigger more of Sam’s diary pages. Those pages are used as milestones showing that you’ve just done whatever was necessary to proceed, making it impossible to miss out on any part of Sam’s story and find yourself confused down the road.

The entire story is a coming of age drama about Sam falling in love with a girl enrolled in ROTC named Lonnie. The big mystery of why nobody is home is that Sam and Lonnie ran off together when Lonnie was being sent away and her parents presumably ran off to go look for them. Considering the rest of this review will mostly consists of me tearing Gone Home a new asshole allow me to get what I liked out of the way really quickly. First, Gone Home is extremely well written, I liked the characters, the story, and the presentation. I found the environment very immersive and think it can give any 90s kid a huge nostalgia trip. My problem, the story left me feeling cheated. If a game costs $20 and tries to sell itself on it’s story alone, I expect a fantastic story, not just a good one. The story never made me look back and think in the way Bioshock Infinite and Spec Ops the Line (the two games with the best stories in recent memory) did. Another problem, the game quickly intrigues the player with the mystery of why nobody is home, because peoples’ imaginations are always going to come up with conclusions that are more surprising than the game can provide. The game leaves you expecting a curve ball that never comes. I understand why; if the developers just came out and called their game ‘Teen Lesbian Romance’ then nobody would buy it (actually a lot of people would probably buy it, just for a completely different reason). Gone Home is an experience that resembles getting on a roller coaster only to discover it doesn’t have hills. Sure I may have enjoyed the ride for other reasons, but it wasn’t really memorable.

Whether you like Gone Home depends on your answer to the question: “can a game be engaging without combat or puzzles?” If no, then you can run straight to Call of Duty, but if your answer is yes then go ahead and check it out, just keep in mind that Gone Home isn’t the diamond encrusted golden savior destined to descend from the heavens and change your life. 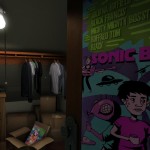 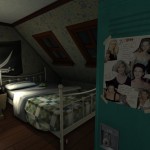 This game is a nice little interactive story its only problems are that it's easily forgettable, it's only two hours long, and its overpriced

[How To] Play Minecraft With an Xbox One Controller on PC