The Far Cry series experienced a significant span of time in which it went largely unappreciated and unnoticed. Far Cry 1 and 2 were both good games, but the series never kicked off until Far Cry 3. Everything changed the day we met the insane antagonist that terrified us with his complete lack of regard for human life, but made us laugh with his nonchalant, self-aware form of insanity. Vaas. The combination of one of the greatest video game antagonists and the addictive gameplay brought Far Cry out of the dark and onto the greatest hits lists. Now, the mid-November release date for the fourth installment in the series is fast coming.

Ubisoft Montreal, with obvious intent to deliver a new kind of insanity to the table, have created a new antagonist for us to struggle for life against. His name is Pagan Min; a flamboyant, snooty-looking fellow with an expressionless face and the well-known track record as a murderous tyrant. He shares the same blatant lack of compassion that Vaas consistently displayed, and the small amount of footage available thus far that features Min depicts him brandishing these terrifying qualities proudly.

The game’s protagonist is named Ajay Ghale, a native experiencing civil war tearing through his homeland. The player will accompany Ajay on his jouney to dethrone ‘King’ Pagan Min the tyrant. Any changes made to the relatively standard sort of FPS gameplay seem to, so far, be quite subtle. The map will be roughly the same size as that of Far Cry 3, and players will have many side quests and activities to engage themselves in all over the island of Kyrat. 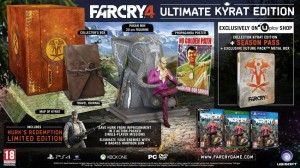 Far Cry 4: Ultimate Kyrat Edition sure comes with a lot of goodies.

Far Cry 4 has big shoes to fill, and Kyrat is a big, dense jungle of opportunity. Soon we will tell if the Far Cry name will carry on strong, and I have a feeling Ubisoft Montreal will deliver as they did with Far Cry 3. Try to stay patient, it’s almost time to delve into another battle against insanity and tyranny on an island full of armed-to-the-teeth enemies when Far Cry 4 releases for the PC, PS3, XBOX 360, PS4, and XBOX One on November 18th.

Pre-order any edition of the game for any available console from Gamestop Here.