Overall Solid Game. Probably the best the Dragon Ball Series has ever seen.

Dragon Ball Xenoverse landed in the U.S. a few days ago and it’s basically THE ONLY THING THAT HAS EVER MATTERED…. At least as far as Dragon Ball games go. It’s a lot of fun, and at times can be an impressive new level of frustrating. So lets check it out!
A simple overview of Dragon Ball XV is that it’s kind of like if you took Phantasy Star Online and stapled Dragon Ball Budokai Tenkaichi’s combat to it’s forehead and gave it a really nice light show, and when I say light show, I mean. THE GRAPHICS IN THIS GAME. ARE GORGEOUS. I don’t think I’ve ever really thought that statement about a Dragon Ball game before. They’ve never looked bad exactly in any iteration of the series, but this is one of the finest looking games I have seen this year. Most of this is due to the very ridiculously saturated colors in the game. If you’re anything like me (Of course you are) and you play on PC, you crank up that Digital Vibrance setting for your graphics card and make the entire world beautiful. It makes colors a lot more saturated as it is, BUT WITH THIS GAME. OHHHHHHH. It’s perfect. A lot of the original voice cast has made it back, and the ones that didn’t are good enough that you won’t notice them being gone. Besides some random moments where they have this strange peppy xylophone driven backing music in some cut scenes the music is pretty good as well. Or at least, it has the amount of energy that you would expect from DBZ while not being completely overcome by cheap metal music. The combat, like I said before, is very close to that of DBZBT. It’s very fast. fluid, and at times, because of 3v3 encounters, INCREDIBLY chaotic. 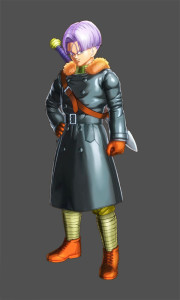 History is being changed. Something is causing all of the old saga villains the Z Fighters previously defeated to be influenced by a strange dark aura that makes them even stronger than they were before.
Trunks, in this game, is the leader of the Time Patrol. A force enlisted by the Supreme Kai of Time to help defend history from being tampered with. With someone trying to alter so much of history for evil, Trunks needs help. He collects all 7 Dragon Balls and wishes for Shenron to bring him a really strong ally to help the Time Patrol keep things under control.

I don’t really know why he didn’t just wish for the power, but I guess that usually doesn’t go too well for people – so, enter YOU.
You get to make your own character in this game seeing as it is an actual MMO. You can select between five playable races: Saiyans, Namekians, Earthlings.… I must be reading this wrong. Majins and Friezas? (Frieza’s race is apprently called Frieza). I feel like you shouldn’t be able to just BE a Majin or Frieza, but I guess being a Saiyan doesn’t make a whole lot of sense either since they’re all for the most part dead as you can possibly die. So for the sake of having more options – Hurray!
From what I’ve seen, the classes all have some small passive difference but don’t change your game play much overall. Except for (by far the most important part of the game) becoming a Super Saiyan! There doesn’t seem to be any transformations for the other classes besides Kaioken. But unfortunately that does not make them Super Saiyan.

So, I went ahead an made a Saiyan for my first character. I was originally going to make a Frieza but I spent too much time not being sure if I looked cool or not. It’s really hard to tell with those guys. As far as that goes, the character customization is okay. It’s not great, it’s not even good really. But it’s not bad. You get some okay options, but for the most part if you don’t want to look like a damn fool then you probably will end up looking mostly like the main characters. I made a big decision with mine and decided it was time for the world to see a BALD SUPER SAIYAN. Yes, It’s happening. We’ve all thought about it; and well. It’s exactly what you’d expect. Your eyebrows just turn yellow. 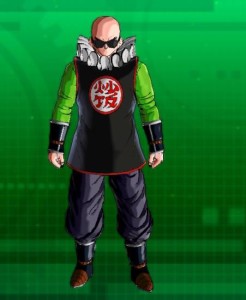 That’s me pretty close to the beginning after only a little bit of questing. Makes you feel some kind of way doesn’t it? Me too.

Most of your time in this game is split between doing the story mode quests for Trunks that all basically involve going back in time to fight the old villains that have been influenced by a mysterious dark power that makes them stronger then before. The idea is you have to go and help the Z Fighters to make sure history doesn’t change. Although it is a change with you being there, you are just going to fix the general history. You help beat down the bad guys, but still insure that what happened in history still happens. Even if that means Goku getting body switched by Captain Ginyu and anything else bad that did actually happen still needs to happen. Just nothing extra bad. When you’re not doing story quests (probably because you got your ass handed 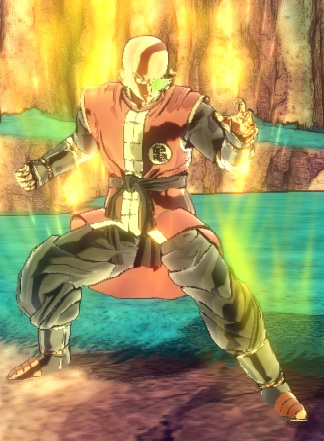 to you at some point) You can go back to the hub city known as Toki Toki City. Here you can take on Parallel Quests which are basically just challenge quests that are related to the story that give you a little bit more freedom. You get to select your team of 3 to fight off anywhere between one and LITERALLY thirty enemies. Now usually the upwards of thirty enemy fights are just with the smaller guys like Saibamen, Cell Jr., and tiny Maijn Buus but the Parallell Quests will sometimes have you fight 5-6 full powered characters back to back without any healing besides what you bring with you to heal. The team you select can be from a list of basically any character that you ever encounter. If you’ve seen him/her before in the game then they are are likely on the list. Want to enlist Goku to help you kill off all of his friends? Go for it. Want to enlist Goku to help kill Goku? More power to ya.

The AI in the game can go from being absurdly stupid (flying around at full speed in a 2 foot radius on repeat) to being huge dicks. I notice this while fighting Goku a lot particularly. Sometimes in the city a character from the story will just show up and ask you to help them take care of their business. The first time I saw this it was Radditz coming to enlist me to go wreck his brother Goku with him. So I got all over that. 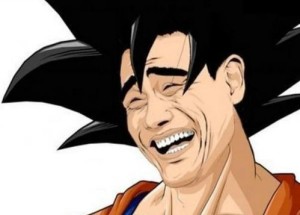 It was the first time I struggled with anything in this game. Maybe I was just trash at the game, but it was really difficult. In this fight you and Radditz take on Goku and Piccolo at the same time. For starters. Piccolo seemed to be WAY stronger than literally everything else forever, but besides that Goku was a conniving bastard. A lot of the time in the game, when you are engaged in 3v3 fights (which is basically all the time) the enemies will usually select a target to focus on so it doesn’t feel like you’re being focuses down, so if you didn’t mess with them, you usually had enough time to fight your target and move on to the next. This isn’t 100% by any means most enemies will occassionally decide to attack you and you need to be careful, but you can for the most part do your seperate duels. NOT WITH GOKU. He is particularly good at just completely dropping his target to randomly double team you. And I mean hard. He’s even smart enough to chain his special attacks with his allies to not only do massive damage, but stun lock you. Don’t mess with Goku.

When you’re not doing quests you can spend some time decking out your character. In the city there is a Market section where you can buy cool looking clothes (Always uniforms from characters in the series), skills, and items. You aren’t really at all limited with what skills you can use as long as you can purchase or find the skill. The only limited skills I know of are the Super Saiyan skills. Besides that you have free reign of how much of a jerk you can be. You don’t really get a whole lot you can buy from the city skills but they are there. You can get skills from other places too. For example if you are in a Parallel Quest fighting the Ginyu Force. You can get Recoome’s Ultimate Attack: Ultimate Fighter Bomber. You don’t just automatically get it, but if you see an enemy use it in a fight with you, there is a chance it will randomly drop for you after completeling the quest. Besides buying and finding them, you can also gain skills from taking on a master. Randomly people considered Masters will spawn in the city (Completely randomly and inconsistently). They will take you on as their pupil if you defeat them in combat which is always very easy and for doing so they will teach you a skill of their own and over time teach more.
Ultimately, if you want to equip Galick Gun, Kamehameha, Masenko, and Destructo Disk then go right ahead. Be that guy. You’ve got a lot of freedom in this game at how you want to play your character and that is the bulk of the fun. The story is alright as far as DBZ stories go, and the parallel quests are challenging, and there is plenty of online stuff to do as well with your friends, but the real fun of this game is seeing your character grow and become a legend.

And if you’re a fan of making nothing but the highest of class characters. Look no further:

Cons: Missions Get Overly Frustrating, Character Customization is pretty limited, and while the outfits you can get are pretty cool, they are basically all just uniforms from characters that already exist. Missions tend to be fairly formulaic and can get tiring, and most importantly: YOU CAN’T GET WOLF FANG FIST.

I’ve poured several of the last few days of my time into this game and so should you. Seriously. Just do it. Go buy it. Like. Now. Unless you are really upset at the lack of Wolf Fang Fist, because honestly. I totally get that. 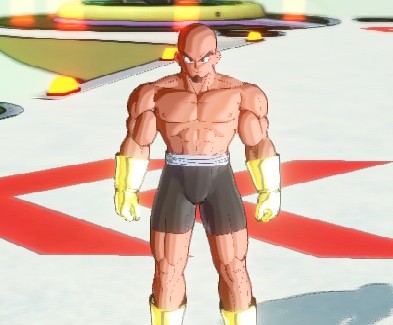 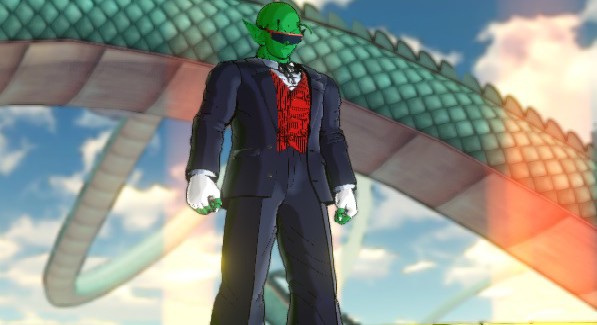 Overall Solid Game. Probably the best the Dragon Ball Series has ever seen.