Action RPGs, in their ever-changing (yet somehow consistent) nature, carry a strong likelihood to become generic. Many developers attempt to reach out for a unique, new way to allow users to experience their world, whether it be a new leveling system, new battle style, etc.; It would seem that if a game doesn’t follow the same general type of cookie-cutter format, it falls flat in the market. Not many RPGs successfully break the mold. However, Dragon Age has always proved that there’s always room for change and improvement, even if the template hasn’t changed too awfully much.

BioWare has always been on the forefront of the RPG market. Mass Effect, Star Wars: KOTOR, and many other titles bolster their product lineup and prove their patriarchal role in the gaming world; So, naturally, there’s a level of expectation present for this upcoming action-RPG. Let’s do a little delving and see if Dragon Age: Inquisition is worthy of such hype, shall we?

Dragon Age: Inquisition will be, in many ways, a composite of the previous two games’ playstyles. First off, character creation. Dragon Age 2 locked us into playing as only a human. Inquisition will once again allow players to experience Thedas through the eyes of a Dwarf, Elf, or Human. Qunari are also, for the first time, a playable class. Customization for characters, including companion characters, has received many tweaks and alterations, allowing for a more in-depth and enjoyable experience when managing your party.

Perhaps one of the game’s biggest advancements lies in the environments. Dragon Age 2 felt like a prison at times, only allowing your character to exist within a very small, predefined area (MOST OF IT WAS JUST ONE CITY) containing a lot of small areas that are frequently revisited. With Inquisition, we’re promised a much larger world, and the almighty developers at BioWare have spoken out about their focus on open-world development and how it can positively impact the series. This should be an interesting thing to see unfold, as BioWare’s games are relatively notorious for having smaller, concentrated environments than most other games in the genre.

The same tactically-rooted gameplay is at work here, but a new layer of versatility has been added to the mix: The ability to change between two gameplay styles. One style follows a more action-based style of gameplay, reminiscent of Dragon Age 2. The other style is a more old school, tactical approach to playing the game. Depending on the pace you prefer, the game can be tweaked to your specifications to make the experience more suited to your ideal RPG experience. 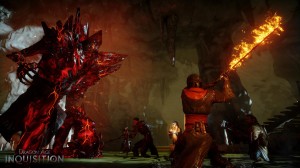 A little taste of the battlefield and a badass scary golem creature thing.

Ok, now for the most interesting new feature to the series… The Inquisition system. Your Character plays the role of the Inquisitor, leading the inquisition to new areas around the game’s open world. Defeat enemy keeps and fortresses, and claim them as your own as you fight to lead the Inquisition forward. After capturing a keep or fort, new sections on the world map become available for exploration, expanding the game world slowly as you become the prominent power in the civil struggle that is tearing Thedas apart.

A BioWare release is always an exciting release. They’re always changing things up, and they always deliver a title that satisfies. Inquisition will surely be an improvement on the series, combining the best aspects of the previous 2 games as well as new, inventive Ideas to bring the series up to par with other games in the current generation of RPGs. Dragon Age: Inquisition will be released on the PS3, XBOX 360, PS4, XBOX One, and PC on November 18th.