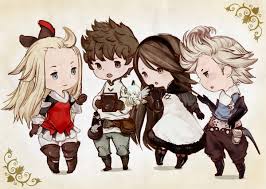 I remember my first systems like it was yesterday. Big ol’ blocky NES and SNES, loads of cool, quirky, sometimes downright stupid games (Shaq Fu, anyone? You know you loved it). These systems started my love for video games (why else would I be writing this?), and Nintendo will always have a place in my heart. The games that really grabbed me, like many others, were the Final Fantasy series. Exploring, battling, being completely lost and wanting to throw your controller at the wall, good times… Now that’s over. The turn-based RPG had slowly started dying out, and it started to shy me away from RPG’s in general. That is, until I found the gem that is Bravely Default. This game does share characteristics of the Final Fantasy series, in terms of storyline. In the original Final Fantasy, four heroes embark to bring light to four crystals in the world, similar to lifting the darkness from four crystals in Bravely Default. This game has often been called the spiritual successor to Final Fantasy: The 4 Heroes of Light. It follows the similar idea of four heroes questing for the Weapons of Light to save the world from evil. Though it may seem like a cookie-cutter “Save the crystals and the world!” plot, the game is definitely not just a copy of previous endeavors. The thirty hours I’ve thrown into this little guy have eaten a lot of time for productivity…

I need to read to enjoy this game?!

Let’s talk story structure! The story for Bravely Default isn’t bad. It’s not a gut-wrenching, heart-pounding, novel of the century, but it fits with the style. Bravely Default has a relaxed, sometimes paint-like, art style. The story, while having its important bits, tries to keep a relaxed style. You’ll laugh and smile at a good bit of the character interactions (don’t skip the optional cut scenes; they really help connect you to the characters!). The relaxed style really works for this game. You don’t feel overwhelmed with emotion, but you’re not so bored you want to sleep or get nachos during cut scenes. It’s just enough to make you want to learn more about the characters, see how they react to each other. This does not indicate perfection, as we all know. There’s a good bit of one-liner type sentences that can be off-putting. The voice acting, while enjoyable, is not the best they could have used. In general, it’s not a game you would play if you want a complex, emotional, non-linear story, but anyone should be able to really get into it. Keep in mind that being 30 hours in, I’m still only halfway done. Let’s hope for a plot twist! 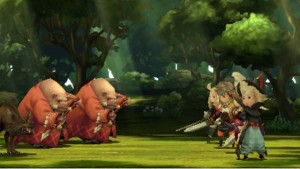 If you want good, old-fashioned turn-based RPG combat, look no further. Also, don’t look here at the same time. You get it and you don’t. Looking at just the basics, Bravely Default has one of the best turn-based combat systems in a long while. This system goes back to the roots of grandpappy Final Fantasy, and does so well. You have four characters fighting, multiple jobs each character can be, and the game requires a good bit of thought during boss fights. As you level up your characters, they also gain job points, which level up whichever of the 24 jobs that character is using. Your characters gain passive and active abilities as they level up their job, and every job has different abilities. Now, we can get into the new systems in place that improve (or degrade) the game. Bravely Default has the Brave and Default systems for combat. Put simply, Brave lets you have up to four moves with a character in a turn but requires you to wait to attack again that many turns, and Defaulting raises brave points while putting your character in a defensive stance (if you have four brave points, you can Brave four times and not have to wait turns to move again). It’s a little weird, but the system works out pretty nicely, and gives a new spin on turn-based battling. A down-side is that you can brute force a lot of fights. I mean a lot. Brave four times on two characters, and most battles are won without any damage. This really hurts the difficulty of the game.

Jobs: The job system has been used many times, and Bravely Default definitely did this well. Jobs are how you get different abilities to try and round your team out. Any character can be any job, and you can have multiples of one job on many characters. Jobs are what really make combat interesting. You can use a lot of thought in your battles and how to get through them easily. Twenty-four jobs in one game is quite a lot though, and I think this helps and hurts the game a bit. I myself have stuck with Monk, White Mage, Knight, Thief, and Ninja, and haven’t really thought of the other jobs too much. Some of the jobs like Salve-Maker or Valkyrie seem really cool, and may work, but they also come off as kind of bulky and extremely situational. Everyone will develop their own opinions on jobs though, as everyone has a different playstyle. One job that your best friend hates may be the one you wanted to max level since you found it. You also want to have fully leveled jobs by end game, and that takes time. Make sure to try out the different jobs as you play! That’s the beauty of job systems; you never know what you might grow to love or hate.

What do you mean no game is perfect?!? 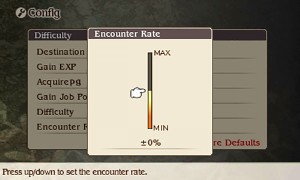 Now let’s go ahead and dig out the few things that could have been left out of this whole shebang. While some people love the ability to raise or lower the number of random encounters while moving through the world, I detest it. You shouldn’t be able to stop all battles when exploring a long cave. A big point of RPG’s was being prepared as best you could to face whatever is going to happen. Turning off battles just takes away that suspense. Some may argue that long journeys where you’ve already been before is more annoying with random battles you don’t need to fight, and I’ll agree to that. It just kills the feel of exploration to have this ability. The same goes for being able to change the difficulty at any point; that just puts incentive to get through a tough boss battle by lowering difficulty instead of leveling up some, or re-thinking your strategy. If you just want a really casual run through, that’s awesome. The idea of being able to take the difficulty out of something just to get through a problem just doesn’t feel right. If you’re not really playing the game, you’re just watching a really long cut scene.

Overall, this is a great game for anyone just getting into RPG’s, and for the seasoned RPG veteran. There’s an enjoyable story line, fun, engaging combat, and a very enjoyable world to explore. This is by no means the best RPG ever created, but it gives whatever RPG you hold on a pedestal a run for its money.