Savage Lands is an up-and-coming Sandbox-Fantasy-Survival game. Developed by Signal Studios, and published by DigitalDNA, Savage Lands puts you into a very unforgiving fantasy world where you are forced to gather scarce resources, construct shelter, battle bloodthirsty enemies, and craft weapons and armor all to meet one simple goal – Survive.

Savage Lands is still in its early alpha stages, but that doesn’t mean that this title lacks the pulp needed to make an amazing survival game. Though, this does mean that not everyone gets a taste of that pulp, since they’ve decided to keep the game in closed alpha for the time being. A friend and I recently got our keys from DigitalDNA and decided to try our hands at survival.

Remember, this is a VERY Early Alpha build, so take my words only at face value. Most of this stuff will be fixed, and much more content will be added before the initial release.

Our first day in Savage Lands progressed much like it would if we were playing Minecraft. We got our bearings, decided on a base camp, and decided who was to gather the food, and who was going to gather wood. It was only then, when we noticed a sharp decline in our status bars, that a deep, unsettling panic set in. We didn’t know how to craft, and more importantly, we had no idea what the bars meant. Of course, red was health; but what was blue and orange? Blue could have been mana but The Australian told me that magic hadn’t been implemented yet. 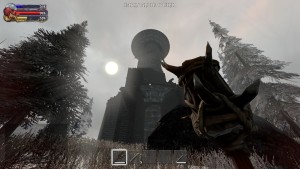 The Tower of the Dragon

After around five minutes of shouting obscenities at each other, we took to the wise man on the mountain (read as: Google) in order to gain the knowledge we so desperately needed. As it turns out, The wise man had no prior knowledge on the subject and only offered the wisdom of, “git gud scrubs”. We headed back to our island, and played around in the menus for around 10 minutes before finally learning that the journal was how we craft buildings. With this new skill learned, we constructed our campfire and set out to hunt the local wildlife.

Skeletons met us over the rise of the hill, though they were no match for the power of our crude hatchets. We picked the “corpses” clean, and took up the swords they had dropped and continued tracking the elk down the shoreline. Surprisingly, ambushing an elk with a sword was much easier than I thought. Which brings me to my first issue.

In several Q&A sessions with the dev team of Savage Lands, they have raved about their advanced A.I. System. Though, it wasn’t present in this current build. I could run up to an elk, stop what I was doing, take a drink of water, and write down something in my notepad before the elk decided it would be a good idea to run from this strange, pudgy creature. Though, there were some cases where I would try sneaking up on a pair of elk but they would both dive into a dead sprint if I got more than twenty feet near them. This also applies to the Dragon – I was directly under his tower insulting his mother, but he refused to come down and toast me. 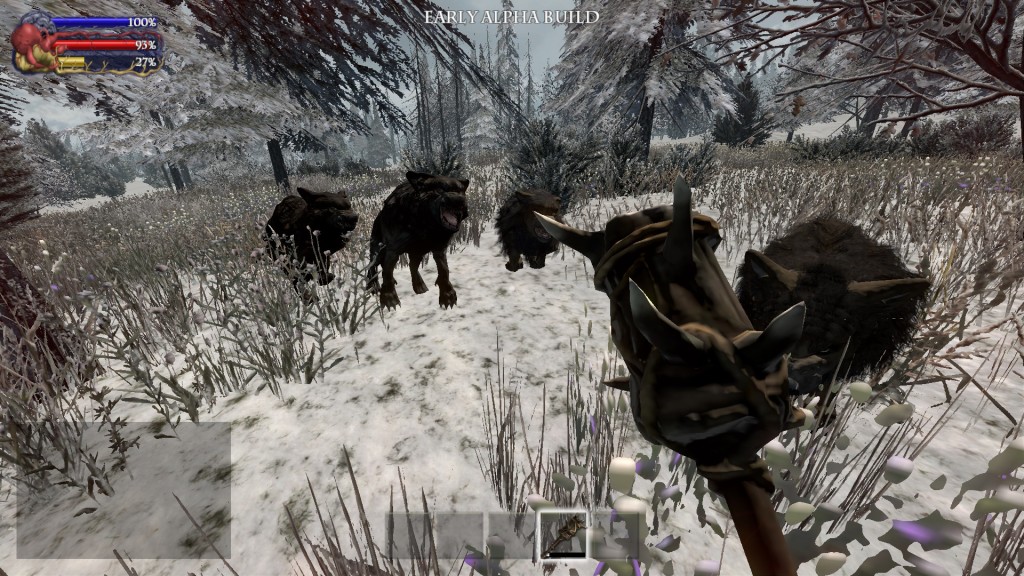 Wolves work as usual though; and the pack behavior is astounding. I was walking towards a town, when I saw a wolf through a pile of brush. I came up closer to this wolf, and lunged forward with my mace held high, but before I could put it down he let out a chilling howl – which brought four more wolves directly to me. If I weren’t the cold-badass that I am, I surely would have died.

I can’t wait to see exactly how the expand upon this as development progresses. I’d even like to see roving bands of skeletons that flank players, or even Elk that get upset that you want their precious hide and fight you, tooth and nail, for it. 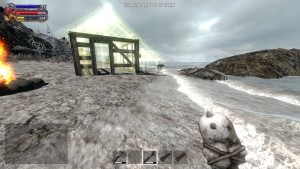 I think the development team is in love with their armor selection. I can’t blame them, it looks sick! I’m still working towards building my Savage Wolf Fur set. Which raises another issue. Scarce resources mean scarce resources. But there’s a difference between scarce, and nigh-existent. Stone is pretty much nowhere to be found further inland, except for around broken scout towers. I spent close to around five minutes attacking a boulder with my mace, hoping that the last stone I needed for my fire would drop. But I grew accustomed to the scarcity. My problem is with the other resources. Bears are nonexistent, and good luck finding any kind of metal ore. I’d like to see them implement caves, or dungeons of some sort, where we can fight through them to get a chest full of the stuff; or implement a way to break down stone into ore, or gems. Aside from that, the content they already have in this alpha makes me think its a beta build, which only means that we’re going to have a ton of content by the time it releases. 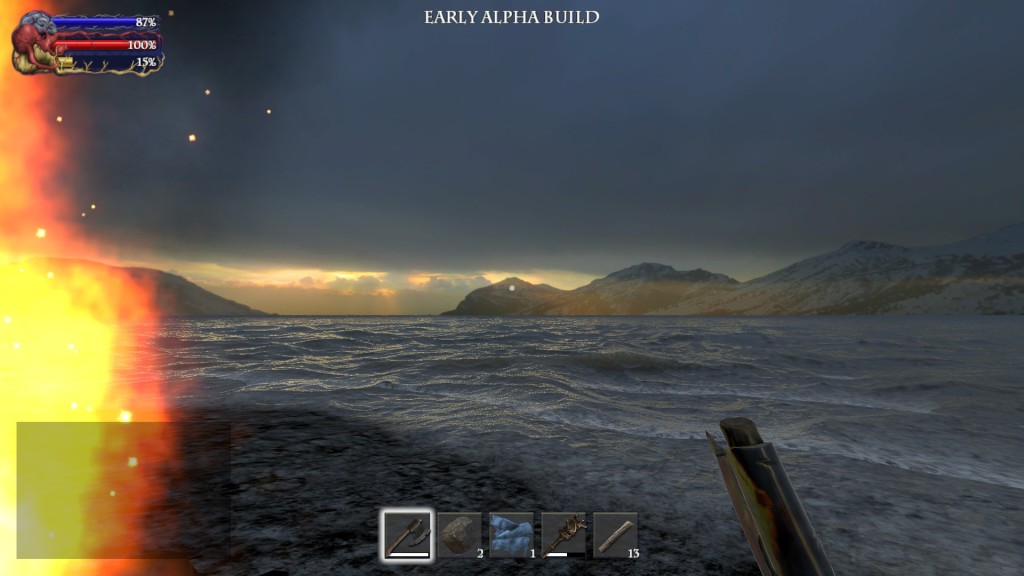 Aside from me having to run it on its lowest settings; Savage Lands is still quite beautiful at times.

So, The Australian and I gathered our food for the evening and built our lean-to’s just in time to watch the sun set over the horizon. That beautiful view definitely did not prepare us for the horrors of the night; and by the end of it, we wished we had just chased the sun into the sea. We spent every minute of that night huddled around our fire so we didn’t freeze. If we strayed from the fire too long, our heat meter (which is blue) would deplete rapidly, and once it hit zero, our health meter followed. We clung to that fire for our lives. We loved the flames, and so did the beasts that prowled the forests. We were attacked by wolves constantly, and skeletons would wander in every so often. Even some kind of corrupted wolf, that looked like Cerberus’ single-headed step-child thought we would make a good midnight snack. 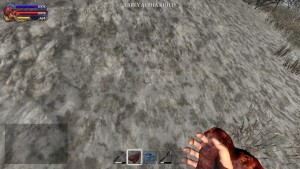 It’s meat! Not a glove! Argh! (a clipping problem they plan to fix in a near update)

Savage Lands does an amazing job of making your gameplay feel desperate. You are constantly hungry, so you need to be constantly looking for food. When night falls; you either find fire, or freeze. Resources are so scarce that even wood becomes a hassle to find given a long enough timeline. All of this culminates into a frightening experience that makes the land Signal Studio has built for us feel truly Savage.

For an alpha build, I am blown away. I can’t wait for future updates, and they can count me and The Australian in on sticking with Savage Lands for a long time.

Want to give it a try?

Join the Slashskill forums, and post your email or link to your steam profile in this thread to be eligible to receive an access code to participate in the Savage Lands Alpha. Or, you could always sign-up for yourself via the official website, and hope that you get one! 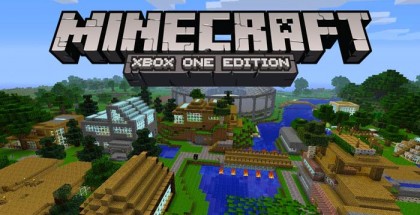